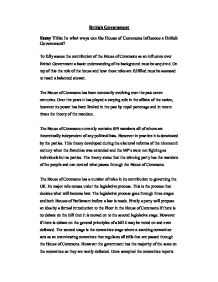 In what ways can the House of Commons influence a British Government?

British Government Essay Title: In what ways can the House of Commons influence a British Government? To fully assess the contribution of the House of Commons as an influence over British Government a basic understanding of its background must be acquired. On top of this the role of the house and how these roles are fulfilled must be assessed to reach a balanced answer. The House of Commons has been constantly evolving over the past seven centuries. Over the years it has played a varying role in the affairs of the nation, however its power has been limited in the past by royal patronage and in recent times the theory of the mandate. The House of Commons currently contains 659 members all of whom are theoretically independent of any political bias. However in practice it is dominated by the parties. This theory developed during the electoral reforms of the nineteenth century when the franchise was extended and the MP's were not fighting as individuals but as parties. The theory states that the winning party has the mandate of the people and can control what passes through the House of Commons. The House of Commons has a number of roles in its contribution to governing the UK. Its major role comes under the legislative process. This is the process that decides what will become law. The legislative process goes through three stages and both Houses of Parliament before a law is made. ...read more.

This means that anything that is passed cannot be stopped. Members of Parliament scrutinise the government by questioning them at question time. Question time is held at the start of each session and the Prime Minister will attend about twice a week. Questions can be asked orally but the MP that the question is addressed to must be informed of the question beforehand, and s allowed to draft an answer. The MP asking the question is then allowed a supplementary question, and the MP's response is taken as official policy. 95% of the MP's are able to second-guess the second question, and are able to draft an answer. The MP can obviously give an elusive answer, but by doing so will lose respect. Question time gives an opportunity for the House to question the government and greatly influence UK government, however it is a time when the government shows its power. As the government has the majority of seats it is their questions that are more likely to get chosen by the speaker and they will generally be sympathetic to their own party, i.e. the government. A government minister can be asked anything, but he will be aware that if he makes an MP's life too difficult he will find it harder to progress. Question time does keep MP's on their toes because if they are asked a question they have to respond. ...read more.

The government will always have a majority on the committee so they can veto any topic with ease. Generally reports are dull and do not receive any publicity. There has however been a decreasing influence of the House of Commons over the years and it has become a major point of concern. Attempts have been made to reinforce the house and increase its importance as a body for scrutinising and influencing government through behavioural, attitudinal and structural changes. Before 1970 party voting was almost total in the division of the lobbies, however more recently governments cannot take their natural majority completely for granted, MP's are becoming more independent in their voting behaviour. The Conservative party under Sir Edward Heath suffered six defeats in the division lobbies when the Tory backbenchers rebelled against the government. This seemed to set a precedent for future governments as the backbenchers realised that collectively they were able to take an active role in the actions of the House. However the effectiveness of the actions of the backbenchers depends upon the size of the majority of the Government. Under the previous two governments cross voting has become much less obvious and effective. Despite the changes that are occurring, the House of Commons remains to be Britain's premier assembly, however its effectiveness as an influence over British government is somewhat limited. The overall power of the government dominates the House. The Houses main contribution is as a law making and scrutinising body that keeps check on all government procedure. ...read more.