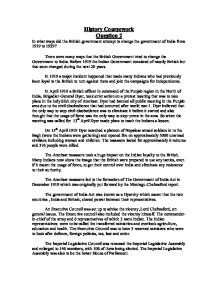 In what ways did the British government attempt to change the government of India from 1919 to 1939?

History Coursework Question 2 In what ways did the British government attempt to change the government of India from 1919 to 1939? There were many ways that the British Government tried to change the Government to India. Before 1919 the Indian Government consisted of mostly British but that soon changed during the next 20 years. In 1919 a major incident happened that made many Indians who had previously been loyal to the British to turn against them and join the campaigns for Independence. In April 1919 a British officer in command of the Punjab region in the North of India, Brigadier-General Dyer, took strict action on a protest meeting that was to take place in the holy Sikh city of Amritsar. Dyer had banned all public meeting in the Punjab area due to the civil disobedience that had occurred after world war 1. Dyer believed that the only way to stop civil disobedience was to eliminate it before it started and also thought that the usage of force was the only way to stop unrest in the area. So when the meeting was called for 13th April Dyer made plans to teach the Indians a lesson. On 13th April 1919 Dyer marched a platoon of Nepalese armed soldiers in to the Bagh (were the Indians were gathering) and opened fire on approximately 5000 unarmed civilians including women and children. ...read more.

This did not change the way that India had been governed since 1919. Again there were many weaknesses in this act. The main reason that there were mass protest was that there were no Indians in the commission. Congress boycotted all meetings and a man called Jawaharlal Nehru introduced the idea of an Independent India. So, Congress rejected the recommendation of the Simon Commission and voted for a total dominion status in December 1929. This meant that India would govern itself however it was still part of the commonwealth and inside the British Empire. A Declaration of Independence was drawn up and 21st January 1930 was proclaimed Independence. However this was not the only way the Indians showed their discomfort. In March 1930 Gandhi started his remarkable Salt March that took him from Ahmedabad to Dandi. In this March Gandhi wanted to prove that India was ungovernable because only the government was allowed to make salt. Gandhi went to the sea and picked up a pinch of salt and in doing this he broke the law. Gandhi was arrested but he had shown the Indian public that if an old man could walk 24 days straight then anything was possible and so after the Salt March congress gained a lot of support. It showed the Indians determination to get the British out of their country and there would be no compromise. ...read more.

Of the seats 250 were reserved for Indians and the other 125 were for the Indian Princes. India was divided in to 11 provincial states. Each province had its own legislative assembly and its own provincial government. Each province would control all policies except defence and foreign affairs. The legislative council for each province would be mostly Indian. The viceroy would still be elected by the British Government. He would be responsible for defence and foreign affairs. He also followed advise from executive committee members who were again mostly Indian. The new Government of India Act hept the communal representation. Altogether 938 seats out of 1525 were reserved for minorities that included Muslims. This new Government of India Act was a direct result of the failure of the Round Table Conferences. This Act gave Indians more say in the way India was governed. Even though Great Britain still had control over India this was the furthest India could go without getting home rule. So in conclusion, the British Government attempted to change the Indian Government so it could satisfy both the Muslim League and Congress. The British were forced to hand more power over to the Indians Government that had now got more Indian representatives then it had had ever before. The British Government tried to maintain their control but not giving India the Home Rule she wanted. The Indians were pleased with themselves because now they played a significant role in the way that their country was governed. ?? ?? ?? ?? ...read more.