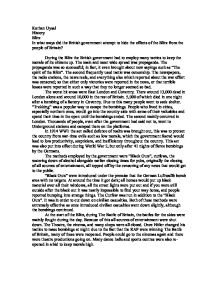 Korhan Uysal History Blitz In what ways did the British government attempt to hide the effects of the Blitz from the people of Britain? During the Blitz the British government had to employ many tactics to keep the morale of its citizens up. The main and most wide spread was propaganda. The propaganda was so successful; in fact, it even brought about new sayings such as "The spirit of the Blitz". The second frequently used tactic was censorship. The newspapers, the radio stations, the news reels, and everything else which reported about the war effort was censored; so that either only victories were reported in the news, or that terrible losses were reported in such a way that they no longer seemed so bad. The worst hit areas were East London and Coventry. There around 13,000 dead in London alone and around 10,000 in the rest of Britain. 5,000 of which died in one night after a bombing of a factory in Coventry. Due to this many people went to seek shelter. "Trekking" was a popular way to escape the bombings. People who lived in cities, especially northern ones, would go into the country side with some of their valuables and spend their time in the open until the bombings ended. ...read more.

Censorship was imposed on all newspapers, radio stations and anything that was to be shown to the general public at large. The only exception to this was the BBC. The government left them to censor themselves, which they did. Newspapers were the worst hit by the new government restrictions. They had to mix propaganda into incidents that were actually happening in such a way that they remained believable and still gave moderate coverage of the true incident. Many photographs that showed death or destruction were censored but some milder ones were allowed to be shown. If all photographs concerning the Blitz had been censored, I feel, the general public would have become suspicious, and this would have been more damaging for the government as their subjects would no longer trust, or believe in them or their causes. Many stories of tragedy, which could potentially demoralise the public, were not released until a much later date: these include the Balham underground station bombing and the Catford Girls' School bombing incidents. However any stories that were covered were exaggerated to sound better than they actually were. Any victory on the British side was blown out of all proportions. ...read more.

This way the government kept checks on its public while being able to cater to their needs without them even knowing they were being watched or listened to. This was probably the most effective way to keep the people's morals high because not only did it control how much propaganda and truth got to the people. It also kept the government in tune with its public and therefore their support would be high in time for the next public elections. The government's rigorous research into what its public wanted made it possible for the propaganda and censorship campaigns work perfectly. Because they knew what the people wanted they could deliver it when they needed it most, and also hide the true effects of the war and the Blitz from them. The reason morals among the people were so high, was because the government encouraged helping out your fellow man: who is also affected by the Blitz. The government hid the true effects of the Blitz in such a way; that it was almost immediately replaced by a new, better truth. This was effective as it kept the countries morals high in such devastating circumstances. ...read more.