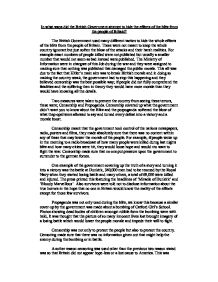 In what ways did the British Government attempt to hide the effects of the blitz from the people of Britain?

In what ways did the British Government attempt to hide the effects of the blitz from the people of Britain? The British Government used many different tactics to hide the whole effects of the blitz from the people of Britain. These were not meant to keep the whole country ignorant but just soften the blow of the attacks and their harsh realities. For example exact numbers of people killed were not published but usually a smaller number that would not seem as bad instead were published. The Ministry of Information were in chargwe of this Job during the war and they were assigned to making sure that nothing was published that damaged the public morale. This all was due to the fact that Hitler's main aim was to break Biritish morale and in doing so making the ocuntry weak, the government had to stop this happening and they believed censorship was the best possible way; if people did not fully comprehend the fatalities and the suffering then in theory they would have more morale than they would have knowing all the details. Two measures were taken to prevent the country from seeing these terrors, these were; Censorship and Propoganda. ...read more.

Censorship was not only to protect the people but also to protect the country. Censoring made sure that there was no information given out that might help the enemy during the bombing or in battle. Another reason censoring was used other than the previous two reason stated was so that Britain did not appear hope-less or a lost cause to America. This was because they though that if America though that Britain was fighting a losing battle, then they would not give them the much needed support. They wanted to give America the appearance of people coping with the war despite all odds. Not every picture was censored, pictures that showed people getting on with their life and stories of heroism and patriotism were printed all over the newspaper and this was hope to instead boost morale. For example a picture of St Paul Cathedral in flames was actually exaggerated with extra flame and smoke to make it look more dramatic and show people that everywhere was bombed, everyone was going through the same thing but people could still pull through. Propaganda also played an immense part during the war to help boost morale. ...read more.

This was also to compete with the German propaganda, at the time, which was saying principally the same thing that they will win and that Hitler is right. Once again propaganda was not only used for boosting morale of the people it was also to keep the people of Britain from talking about confidential information that could get wind to enemy spies, posters carrying slogans such as, 'You Never Know Who's Just Around The Corner.' Were meant to make people aware of the risk of talking about any information that may be useful to the enemy. The government used two different methods to hide the effects of the blitz form the people of Britain, these were; Censorship and Propaganda. Both of these were very successful at achieving their intention of maintaining the morale of Britain, as the people knew there were horrors going on around them but they did not know the full extent of these. This may have helped Britain win the war by not encouraging people to put pressure on the government but willing them instead to win and avenge their loved ones deaths. ...read more.