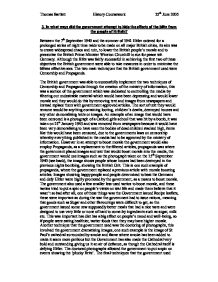 In what ways did the government attempt to hide the effects of the blitz from the people of Britain? Between the 7th September 1940 and the summer of 1941 Hitler ordered for a prolonged series of night time raids

3. In what ways did the government attempt to hide the effects of the blitz from the people of Britain? Between the 7th September 1940 and the summer of 1941 Hitler ordered for a prolonged series of night time raids to be made on all major British cities, its aim was to create widespread chaos and ruin, to lower the British people's morale and to pressurize the British Prime Minister Winston Churchill to sue for peace wit Germany. Although the Blitz was fairly successful in achieving the first two of these objectives the British government were able to take measures in order to minimize the blitzes effectiveness. The two main techniques that the British government used were Censorship and Propaganda. The British government was able to successfully implement the two techniques of Censorship and Propaganda through the creation of the ministry of information, this was a section of the government which was dedicated to controlling the media by filtering out undesirable material which would have been depressing and would ...read more.

The government also used a few smaller less used tactics to boost morale, and these tactics tried to put a spin on people's views on war life and made them believe that it wasn't so bad after all, one of these things was the Government issued Recipe leaflets, these were important as during the war the government had to issue rations, meaning that goods such as Sugar and other flavourings were difficult to get, so the government issued some new supposedly better meals that had a nice taste and were designed to use very little or none of hard to come-by ingredients such as sugar, milk etc. This was important has diet has a big effect on people's mood and well-being, so if people were eating healthier, tastier foods then they may have higher morale. Another technique that the government used was the doctoring of photographs, this involved the government dramatising images, one such example is the image of St Paul's cathedral surrounded by smoke and flame where smoke has ...read more.

night (see back), and yet were still happy, determined to pull through and displaying the British grit , the government managed to put a spin on the events, by saying that although the peoples homes had been destroyed it had only made them more determined to continue the struggle against Hitler and defy him, they hoped that censorship coupled with the propaganda would help to boost morale. The ministry of Information also employed recipe leaflets in an attempt to boost morale and show people that life in the war wasn't so bad; the ministry also employed many radio humourists, as this was a good way of boosting morale. I believe that after employing all these techniques the government was able to maintain British morale quite effectively, the techniques made people feel that the war wouldn't be so bad and seems to have had a long-lasting effect as many people still believe in the 'Dunkirk spirit' and the 'plucky Brits'. ?? ?? ?? ?? Thomas Bartlett History Coursework 25th June 2005 ...read more.