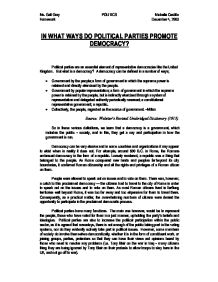 In What Ways Do Political Parties Promote Democracy?

IN WHAT WAYS DO POLITICAL PARTIES PROMOTE DEMOCRACY? Political parties are an essential element of representative democracies like the United Kingdom. But what is a democracy? A democracy can be defined in a number of ways; * Government by the people; a form of government in which the supreme power is retained and directly exercised by the people. * Government by popular representation; a form of government in which the supreme power is retained by the people, but is indirectly exercised through a system of representation and delegated authority periodically renewed; a constitutional representative government; a republic. * Collectively, the people, regarded as the source of government. -Milton Source: Webster's Revised Unabridged Dictionary (1913) So in these various definitions, we learn that a democracy is a government, which includes the public - society, and in this, they get a say and participation in how the government is run. Democracy can be very elusive and in some countries and organizations it may appear to exist when in reality it does not. For example, around 500 B.C. in Rome, the Romans embraced democracy in the form of a republic. Loosely rendered, a republic was a thing that belonged to the people. ...read more.

Members of the public can do this by participating in the general elections, by voting for whom they want in power. However, it is argued that this method is not a true representation of the public, as the number of votes are proportional to the number of seats in the House of Commons, not everyone votes, and also because constituent MPs can still win even if they do not win the majority vote in a particular constituency. There are also problems with the party that is in power. There is rarely elective dictatorship; this is when the Prime Minister takes total power, and can even abuse the authority that has been given to him/her. There can also be tyranny of the majority, as well as executive dictatorship, whereby the whole of the executive - the Prime Minister and his party members (Cabinet) are liable to take total power and abuse the authority that has been given to them, by making decisions, new laws, and actions that society and members of the public may not necessarily agree with. There are also regular elections in a liberal democracy. The political parties will provide the candidates and policies for the electorate, and this would also mean that the public know what values and representatives that particular party has. ...read more.

This is also the case with membership. The more members and supporters a political part has, the more it will be democratic and highly active in their role and obligation towards the rest of society. As views and opinions may differ on whether or not political parties are democratic, parties do actually (whether they are highly effective or not) DO promote democracy in their functions. They do this in various ways; such as involve society with their representation of them, through their views and policies. Problems do occur when a party is in power. I don't think there has ever been a time in political history where a political party did not face any problems along the way. Problems are inevitable - they are bound to happen, as there is always an opposing party, as well as many other political parties who may not necessarily share the same belief, principles or ideologies as the political party in power. There will always be conflict, whether big or small conflicts, and there are always people who will digress from the mainstream way of thinking. However, political parties do promote democracy. The only case now, is whether or not they do this effectively as possible. Ms. Gall Gray POLITICS Michelle Castillo Homework December 4, 2003 ...read more.