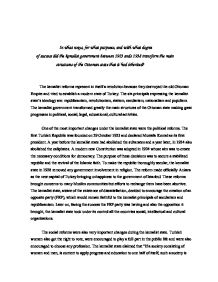 In what ways, for what purposes, and with what degree of success did the kemalist government between 1923 ands 1938 transform the main structures of the Ottoman state that it had inherited?

In what ways, for what purposes, and with what degree of success did the kemalist government between 1923 ands 1938 transform the main structures of the Ottoman state that it had inherited? The kemalist reforms represent in itself a revolution because they destroyed the old Ottoman Empire and tried to establish a modern state of Turkey. The six principals expressing the kemalist state's ideology are: republicanism, revolutionism, statism, secularism, nationalism and populism. The kemalist government transformed greatly the main structures of the Ottoman state making great progresses in political, social, legal, educational, cultural activities. One of the most important changes under the kemalist state were the political reforms. The first Turkish Republic was founded on 29 October 1923 and declared Mustafa Kemal as its first president. A year before the kemalist state had abolished the sultanates and a year later, in 1924 also abolished the caliphates. A modern new Constitution was adopted in 1924 whose aim was to create the necessary conditions for democracy. The purpose of these decisions was to secure a stabilized republic and the revival of the Islamic faith. To make the republic thoroughly secular, the kemalist state in 1928 removed any government involvement in religion. ...read more.

The decision to forbid the wearing of the fez (a covering of the hairs in public) and its replacement with the hat was made in 1925. In many part of Turkey, especially in the more developed areas in the west, thousands of men bought hats. The kemalist state forbade the wearing of veils, which according to them was not even required in the Kuran. The degree of success in these reforms on secularization was partial. This was because while the wearing of hat instead of fez, although with great difficulties, was accomplished, the veil was never really forbidden and these days there are still women who wear them. Changes concerning the legal reforms were the adoption of the Swiss civil code and the Italian penal code on 1926. The legal position of women and their place in a society was greatly improved. The civil code made all citizens - men and women, rich and poor - equal before the law. This law also made polygamy illegal while giving the women the right to divorce. The penal code, apart it's other issues, prohibited the forming of associations on religious basis. The law gave to people freedom of private property, financial responsibility and also freedom of contract. ...read more.

It was also a kind of struggle against illiteracy, which had been extremely high because of the mismatched language the Islamic was. They served not only to make Turkey a more European country but also made easier its communication with the Western world. The kemalist government launched a campaign all over Turkey intended to promote and support the Latin scripts use. The kemalist state was successful in making this script compulsory in public communication while it was ineffective in making it be used in prayers.5 These reforms made accessible the culture of the West to the Turkish Nation. However, on the struggle against illiteracy the kemalist reforms were not very successful. In conclusion, I want to state that the kemalist government was an authoritarian regime because the means and ways it used to accomplish its goals were not always acceptable. The platform of the government could be described more as a set of attitudes and opinions, rather than a democratic platform. However, in my opinion this state made great changes in different structure of the Turkish state. In all fields that the reforms took place the results were mainly positive and only rarely partial. Therefore, I would state that the work of the kemalist state between 1923-1938 lay in leading Turkey along the path of the Western world. ...read more.