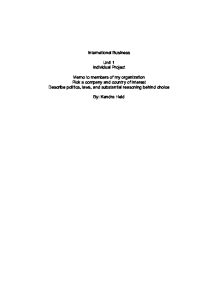 International Business Unit 1 Individual Project Memo to members of my organization Pick a company and country of interest Describe politics, laws, and substantial reasoning behind choice By: Kendra Heid To: All Managers of the Organization From: Kendra Heid Subject: Billabong in New Zealand This memo includes a brief overview of Billabong and why New Zealand is a potential international market. You will also be informed of what type of government this country upholds, focusing on political and legal systems. There is also an explanation for each phase of government. You'll find that I've provided a little information on the country's main tourist attraction for activities that pertain to Billabong's mission as surf, skate, snow, and wake company. Billabong, as you may or may not know, is a surf and extreme sports clothing and accessories brand. Some products they offer include swimwear, t-shirts and jeans and shoes. They also offer specialty gear at sports stores around the world including surfboards, wakeboards, snowboards and skateboards. We should consider bringing Billabong to New Zealand. ...read more.

The Cabinet, then, is headed by an appointed Prime Minister, and this person is the majority party leader in the House of Representatives. (nationmaster.com, 2005) The legislative branch, as already discussed, consists of a 120-member unicameral Parliament, meaning that it only has one chamber, the House of Representatives. Membership is served for three years and is either elected through proportional party representation or according to geographic electorate, with reserved seats for Maori members. Maori are the indigenous people of New Zealand and are the minority party. Everyone over 18 years of age can vote for Parliament members, including women who have been voting since 1893, 27 years prior to American women's suffrage!! (nationmaster.com, 2005) The judiciary branch consists of the Supreme Court of New Zealand, the Court of Appeals of New Zealand, the High Court, the District courts, and other courts and tribunals (nationmaster.com, 2005). All judges are appointed by the Governor General (The World Factbook, 2005). ...read more.

A policy agreement from 1996 states that one of the "fundamental principals for coalition is to maintain an open, internationally competitive economy" (Henderson, 1997). With all of this in mind, seeing that the government does partake in the decisions that will boost the economy from the international market, New Zealand would welcome Billabong into their borders, maritime and national alike. New Zealand, a mostly mountainous country, surrounded by water with a pleasantly temperate climate, would be a great candidate for Billabong to set up shop. On both islands, national parks are established with a vast variety of activities to participate in, including snow boarding (newzealand.com, 2005), one of the Billabong companies special interests. Offering Billabong gear, clothing, and accessories, along with possible ski tournaments that could be held on Mount Cook, which rises 3,700 feet above sea level and is always covered in snow, could help New Zealand get that extra boost it's willing to take economic risk on (The World Factbook, 2005). ...read more.