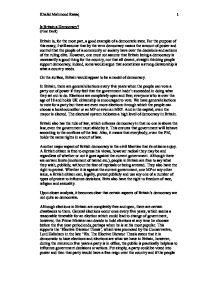 Is Britain a Democracy?

Is Britain a Democracy? (First Draft) Britain is, for the most part, a good example of a democratic state. For the purpose of this essay, I will assume that by the term democracy means the amount of power and control that the people of a community or society have over the decisions and actions of the ruling elite. However, one must not assume that Britain being a democracy is necessarily a good thing for the country, nor that all decent, straight-thinking people support democracy, indeed, some would argue that sometimes a strong dictatorship is what a country needs. On the surface, Britain would appear to be a model of democracy. In Britain, there are general elections every five years when the people can vote a party out of power if they feel that the government hadn't succeeded in doing what they set out to do. Elections are completely open and free; everyone who is over the age of 18 and holds UK citizenship is encouraged to vote. We have general elections to vote for a party but there are even more elections through which the people can choose a local councillor or an MP or even an MEP. ...read more.

Brits also have the right to freedom of race, religion and sexuality. Upon closer analysis, it becomes clear that certain aspects of Britain's democracy are not quite so democratic. Although elections in Britain are completely free and open, there are certain drawbacks to them. General elections occur once every five years, which seems a reasonable timetable for an election which could lead to change of government, however, the Prime Minister can decide to hold elections at any time he chooses before the five year period ends, perhaps when he is at his most popular. This supports the 'Elective Dictator Thesis', which was promoted by the Conservative, Lord Halisham in the late '70s. The Elective Dictator Thesis states that it is democratic to have elections and elections are what we have in Britain, however, during the minimum five years a party is in office, the public is practically helpless to influence government decisions or actions. Put simply, a party could be voted into power and then that party would have a free reign over the country and if the people were unhappy and the government ignored them, all the people could do is wait for five years and vote the party out. ...read more.

In Britain at the moment, there only a partial separation of powers as the spheres of government are somewhat merged. And the powers are not entirely balanced, with the executive holding the most power. There is an element of checks and balances between the spheres, however this checking does not interfere much with decision making because if there were more checks and more separation of powers, there would be more democracy but decision making would be much slower and this would portray the government as weak and indecisive. Some hold the elitist view, which proposes that the real power holders are always out of public view and are unaffected by the electoral system. Ken Livingstone once said, '...if voting changed anything, they'd abolish it...' Minority views are also an issue with British democracy. By the current system, if in a general election, Party A gets 599 votes and Party B gets 600 votes, Party B gets into office and the 599 people who voted for Party A will go unrepresented. (Apathy?) In closing, the British system of democracy is broadly democratic. Compared to other countries, Britain is a shining beacon of democracy, however, there are small but significant sections of the system, which are undemocratic and could be improved. 1 Khalid Mahmood Razaq ...read more.