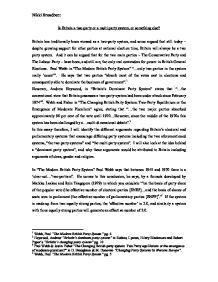 Is Britain a two-party or a multi party system, or something else?

Is Britain a two-party or a multi party system, or something else? Britain has traditionally been viewed as a two-party system, and some argued that still today - despite growing support for other parties at national election time, Britain will always be a two party system. And it can be argued that for the two main parties - The Conservative Party and The Labour Party - have been, and still are, the only real contenders for power in British General Elections. Paul Webb in "The Modern British Party System" "...only two parties in the system really 'count'". He says that two parties "absorb most of the votes cast in elections and consequently able to dominate the business of government".1 However, Andrew Heywood, in "Britain's Dominant Party System" states that "...the conventional view that Britain possesses a two-party system had been under attack since February 1974"2. Webb and Fisher in "The Changing British Party System: Two-Party Equilibrium or the Emergence of Moderate Pluralism" agree, stating that "...the two major parties absorbed approximately 90 per cent of the vote until 1970...However, since the middle of the 1970s this system has been challenged by a...multi-dimensional debate".3 In this essay therefore, I will identify the different arguments regarding Britain's electoral and parliamentary systems that encourage differing party systems including the two aforementioned systems, "the two party systems" and "the multi party system". ...read more.

In the 1974 election, the Liberal party made significant gains since previous election, achieving 19.3 per cent of the vote, a substantial leap from the 7.5 per cent they won in the previous election, "a post-war high". They argue that "In short, the party system started to take on a more fragmented appearance as the actual number of parties represented in parliament increased from four to nine", also the effective number calculated also shifted from 2.5 during the late 1960s, to 3.1 twenty years later.9 This trend in the late 1960s which continued through the 1970s can be attributed to declining social class as an influence on electoral choice. In previous decades, social class was a much wider determinant of voting behaviour, occupation, education level private home ownership etc all determined to which social 'class' you belong, and those that fall into the same categories, tend to vote for the same party, or policies. However, there is a shift in the period between the early 1960s and the late 1970s. An indicator of this is the response of voters to assign themselves to a social class. Only 50 per cent of people would assign themselves to a particular class, declining to 43 per cent in 1974.10 However, despite the rise in class politics in this period, this number unwilling to be assigned to a 'class' increases throughout the twentieth century and can be attributed to a number of factors - the rise in further and higher educations and the rise in privately owned-housing. ...read more.

'New Labour' can be seen as a shift to the 'right' and a removal of old ideas of socialism within the twentieth century. The election of New Labour can perhaps only help Heywood's dominant party system assertion. In conclusion, Britain at varying times in history can be called a dominant party system, a two party system, a multi party system and others. There is much evidence to back up all of these claims, particularly post-1945. However, it can be argued that the simple fact that there are different arguments and that these systems change over time, that Britain is a multi-party system. Though there is evidence to suggest that Heywood's dominant party theory was perhaps true at the time of publication, since then there has been a successful Labour government for 10 years. The slow increase of political party MPs in the House of Commons also proves that Britain is a multi-party system, and while these parties may be limited to one seat and little in any influence in parliament, this is due to Britain's limited system of First Past the Post. The fact that there are more than two parties making up parliament, and that other parties have won constituencies, shows that the British Electorate are voting for more than the two main parties. Therefore, I believe the steady increase of other parties, particularly of the Liberal Democrats, will continue into the twenty first century. ...read more.