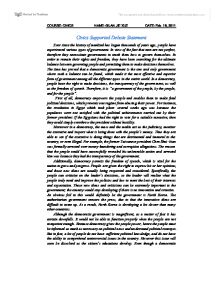 Is Democracy the Superior Form of Government?

Ever since the history of mankind has begun thousands of years ago, people have experienced various types of government. In view of the fact that men are not perfect, therefore they necessitate governments to teach them how to govern themselves. In order to remain their rights and freedom, they have been searching for the ultimate balance between governing people and permitting them to make decisions themselves. The time has proved that a democratic government is the one and only government where such a balance can be found, which made it the most effective and superior form of government among all the different types in the entire world. In a democracy, people have the right to make decisions, the transparency of the government, as well as the freedom of speech. Therefore, it is “a government of the people, by the people, and for the people”.

First of all, democracy empowers the people and enables them to make fatal political decisions, which prevents one regime from abusing their power. For instance, the revolution in Egypt which took place several weeks ago was because the populaces were not satisfied with the political achievements carried out by their former president. If the Egyptians had the right to vote for a suitable executive, then they could simply overthrow the president without hostility.

Moreover in a democracy, the mass and the media act as the judiciary, monitor the executive and inspect what is being done with the people’s money. Thus they are able to see if the executive is doing things that are detrimental and immoral to the country, or even illegal. For example, the former Taiwanese president Chen Shui-bian was formally arrested over money-laundering and corruption allegations. The reason that the people could have successfully revealed his unbearable action and arrested him was because they had the transparency of the government.

Additionally, democracy permits the freedom of speech, which is vital for the nation to grow and progress. People are given the right to express his or her opinions, and those new ideas are usually being respected and considered. Specifically, the people can criticize on the leader’s decisions, so the leader will realize what the people truly need and improve the policies and law to meet the best of their interests and expectation. Those new ideas and criticisms can be extremely important to the government; the country would stop developing if there is no innovation and creation. An obvious foil to this would definitely be the government is North Korea. The authoritarian government censors the press, due to that the innovative ideas are difficult to come up. As a result, North Korea is developing a lot slower than many other countries.

Although the democratic government is magnificent, as a matter of fact it has certain downfalls. It would not be able to function properly when the people are not competent enough. Because democracy gives the people power, hence the people must be informed as much as necessary on political news and understand political concepts. But in fact, a lot of people do not have sufficient political knowledge, and do not have the ability to comprehend controversial issues in the country. However this issue will soon be dissolved as the citizen’s educations develop. Even though a democratic government is not the perfect government, it is the best form of government when comparing to the others all around the world. It is a government that provides people with the rights and freedom.