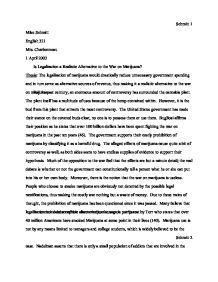 Is Legalization a Realistic Alternative to the War on Marijuana?

Schmitt 1 Mike Schmitt English 321 Mrs. Charbonneau 1 April 2003 Is Legalization a Realistic Alternative to the War on Marijuana? Thesis: The legalization of marijuana would drastically reduce unnecessary government spending and in turn serve as alternative sources of revenue, thus making it a realistic alternative to the war on marijuana. For the past century, an enormous amount of controversy has surrounded the cannabis plant. The plant itself has a multitude of uses because of the hemp contained within. However, it is the bud from this plant that attracts the most controversy. The United States government has made their stance on the coveted buds clear, no one is to possess them or use them. Bugliosi affirms their position as he states that over 100 billion dollars have been spent fighting the war on marijuana in the past ten years (46). The government supports their costly prohibition of marijuana by classifying it as a harmful drug. The alleged effects of marijuana cause quite a bit of controversy as well, as both sides seem to have endless supplies of evidence to support their hypothesis. Much of the opposition to the war feel that the effects are but a minute detail; the real debate is whether or not the government can constitutionally tell a person what he or she can put into his or her own body. Moreover, there is the notion that the war on marijuana is useless. People who choose to smoke marijuana are obviously not deterred by the possible legal ramifications, thus making the costly war nothing but a waste of money. Due to these trains of thought, the prohibition of marijuana has been questioned since it was passed. Many believe that legalization is indeed a realistic alternative to the war on marijuana. A common misconception about marijuana usage is put to rest by Torr who states that over 40 million Americans have smoked Marijuana at some point in their lives (140). ...read more.

If the government were to control marijuana, there would be at least an extra one Schmitt 6 hundred billion dollars at their disposal. The naysayers are quick to object to this fact, feeling that marijuana can never be successfully controlled. They feel as if the effects of legalized marijuana would be tremendously detrimental to society. Unfortunately, they can never provide any proof that this would indeed happen. In fact, several countries in Europe, such as the Netherlands, have completely legalized marijuana. Others, such as Great Britain, have decriminalized the possession of minute amounts. Nadelman has observed Europe and his conclusion is very inconsistent with the naysayers argument. He asserts that in Europe the ability to sell marijuana without advertising and the addition of tax has done wonders to decrease violence and corruption (122). There is absolutely no doubt that if European countries are able to do it, then the United States would successfully be able to do it as well. Economics, however, should not be the only motive behind the legalization of marijuana. The cannabis plant's senseless illegality has many other dire consequences. First of all, there is a misconception that marijuana causes violence. It is not the marijuana, or any other drug for that matter, that actually causes the violence. "It is the necessity for illegal drugs [that] creates an unsafe atmosphere" (Milhorn 19). Drug related violence only occurs because the entire market is an underground market which features deception and corruption. Torr concurs with Milhorn. He feels that the prohibition of marijuana causes crime. By driving up the price of drugs, prohibition forces drug users to commit crimes to pay for a habit that would easily be affordable if it were legal (105). This fact is supported by the law of supply and demand. Since marijuana is illegal, there is a very small supply. Thus, the unsatisfied demand for marijuana is extremely high. ...read more.

Since the inception of the prohibition of marijuana, many government officials have swayed from stance to stance. Most of them publicly denounce marijuana to appease the masses, but their real feelings remain unknown. Murdock asserts that Schmitt 11 Jimmy Carter was the first president to endorse legalization (8). Many other presidents' campaign trails have been marred by rumors of drug usage, which brings to mind a simple notion. They used drugs and still went on to lead a very successful life; something some people do not understand is possible. Maybe the American government will follow the Canadian government's suit. Fizli asserts that Canadian senators issues a six hundred page report on marijuana and concluded that it is not harmful to health and should be legal for any Canadian over the age of 16 (18). Granted the age may be debatable, but large governing bodies such as the Canadian senators are setting precedents that should be considered. What makes legalization a realistic alternative is not the fact that marijuana is not harmful. Although the understanding of that concept would decrease a lot of anti-marijuana propaganda, it really is not relevant as the government truly does not have any power to say that one cannot smoke marijuana. The said ruling is unconstitutional; the government should have no say in what goes into someone's body. What makes it a realistic alternative is the fact that the United States is spending over fifty billion dollars a year to insure that no one uses marijuana, and that those who do are punished. There is absolutely no reason to waste fifty billion dollars of the taxpayers' money on such a petty matter. Marijuana usage does not pose a threat to society. Furthermore, the government could receive in excess sixty billion dollars in revenue from taxing marijuana, thus giving them well over one hundred billion dollars more at their disposal. There are an abundance of concerns in the United States that one hundred billion dollars a year could provide. However, they would rather spend it restricting the peoples' God-given rights: life, liberty, and by and large, the pursuit of happiness. ...read more.