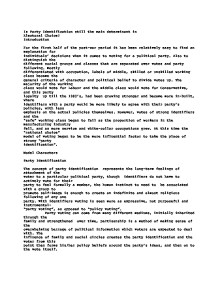 Is Party Identification still the main determinant in Electoral Choice?

Is Party Identification still the main determinant in Electoral Choice? Introduction For the first half of the post-war period it has been relatively easy to find an explanation for individuals' decisions when it comes to voting for a political party. Also to distinguish the different social groups and classes that are separated over votes and party following. Mostly differentiated with occupation, labels of middle, skilled or unskilled working class became the general criteria of character and political belief to divide votes up. The majority of the working class would vote for Labour and the middle class would vote for Conservative, and this party loyalty up till the 1980's, had been growing stronger and became more in-built, where identifiers with a party would be more likely to agree with their party's policies, with less emphasis on the actual policies themselves. However, votes of strong identifiers and the "safe" working class began to fall as the proportion of workers in the manufacturing industry fell, and as more service and white-collar occupations grew. At this time the "rational choice" model of voting began to be the more influential factor to take the place of strong "party identification". Model Characters Party Identification The concept of party identification represents the long-term feelings of attachment of the voter to a particular political party, though identifiers do not have to actively vote for their party to feel formally a member, the human instinct to need to be associated with a group to promote self-image is enough to create an indefinite and almost religious following of any one party. ...read more.

This change is general thinking gave way to small and radical parties who in the past would not have even been noticed, to turn out strong performances in elections. The Tactical Voting Model This voting model is relatively rare and came about after the period of "partisan dealignment" when 3rd parties were being considered when the strong party identification was weakened. The explanation for voting this way is simple and undoubtedly rational. The idea of this model is a voter's way of gaining what he/she feels is the most desirable result in an election whether it being voting a candidate in, or attempting to keep a candidate out, this can be done in three ways: 1. The voter votes for the desired party, with a strong belief in mind that there is a good chance of the party winning. 2. The voter realises his desired party has no chance of winning, but his second choice may do so, but is facing strong competition from an undesired party. The voter then votes for his second choice, ignoring his partisan inclinations, from fear of the unfavourable party winning. 3. None of the voter's preferences have a solid chance of winning, so he/she votes for the party who is closest to keeping the undesired party out. This method brings the point to the fore, that politics isn't just about who the voter wants to represent them, but also who they don't, which is just as important. ...read more.

Retrospective Voting Retrospective voting is simply a model of voting where the voter elects purely on the basis of a parties past performance in government, since humans are more likely to respond to past proof rather than future promises, this model seems perfectly logical. This model may well explain the voting choice of certain identifiers, though not entirely through emotional attachment, but with a certain rationality, believe in the long term record of a party and are not overwhelmingly affected by "minor slip ups". Voters of this model are more concerned with accomplishments rather than policies. Conclusion Despite the partisan dealignment and a decrease in overall loyalty to single parties, Party identification is still a main influence on electorate choice. In a political world where there are so many opinions, judgements and ill-feelings, it still seems people prerogative to stay "safe" with one party, if asked on their views they are not required to think for themselves because the party and social circle speaks in place. It remains to be seen if one model of voting is more useful to all concerned, but if there was one that was proved to be superior, it would no doubt change with time and social feeling. The reasons why people vote will never be fully discovered, because human motives and emotions cannot be evaluated by researchers and commercial data. One thing that will always be a part of voting explanation is the politics of the mind, campaigns and media attention will always subconciously be absorbed by the electorate. ...read more.