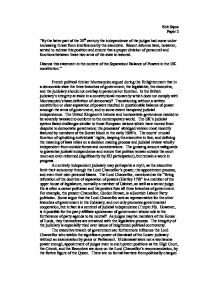 Is the British judiciary's integrity at stake in a constitutional monarchy which does not comply with Montesquieu's base definition of democracy? Transitioning without a written constitution

Edit Sipos Paper 2 "By the latter part of the 20th century the independence of the judges had come under increasing threat from interference by the executive. Recent reforms have, however, served to redress this position and ensure that a proper division of personnel and functions between these two arms of the state is restored. Discuss this statement in the context of the Separation/ Balance of Powers in the UK constitution." French political thinker Montesquieu argued during the Enlightenment that in a democratic state the three branches of government; the legislative, the executive, and the judiciary should not overlap in personnel or function. Is the British judiciary's integrity at stake in a constitutional monarchy which does not comply with Montesquieu's base definition of democracy? Transitioning without a written constitution or clear separation of powers resulted in questionable balance of power amongst the arms of government, and to some extent hampered judicial independence. The United Kingdom's historic and homeostatic governance needed to be severely tweaked to conform to the contemporary world. The UK's judicial system faced challenges similar to those European nations which have moved from despotic to democratic governance; the processes' abridged version most recently featured by members of the Soviet block in the early 1990's. The courts' crucial function of upholding individuals' rights, keeping the executive in line, and defining the meaning of laws relies on a decision making process and judicial review wholly independent from outside forces and considerations. ...read more.

The appointment process has often been criticized for being "haphazard" and an "old-boy network" (Turpin 50) with judges from similar, middle-class backgrounds and an Ox-bridge education (Hartley 169). Unsurprisingly, judges historically tend to be deeply conservative, favouring the property owner, employer, and the status quo. So how much of protecting the citizens rights from an all-mighty government factors in? Not much. In reality, judicial review, or the courts' power to intervene where public authority acts unlawfully, is most often used to bind local government rather than impede the central state (Sueur 467). Although the limitations on the ethos of judicial independence may seem grim, there are in fact increasing legalities vouchsafing judges' unimpeded discharge of their duties. Although the principle of separation of power presupposes judicial neutrality, unabridged independence of the judiciary can only be expected from an independently appointed body of individuals secure in their tenure and livelihood. The appointment process has been significantly re-vamped since 1997, with the High Court being gathered from the entire pool of those eligible for the profession instead of an invitation-only basis. A Commission of Judicial Appointment has also been created for oversight of the system and recommendation. As judicial appointments are meant to be apolitical, judges are expected to abstain from political involvement and are not permitted membership of the House of Commons. ...read more.

Although it is important to secure the independence of judicial administration and review, it is equally important to maintain the precious balance within the government, lest the watchdog becomes the master. Judges are fallible and human, and they will inherently bring with them values instilled in them by society, education, and their family that will subtly influence their decision making. These are inevitable and even desirable aspects of decision making. However, true to the doctrine of judicial independence, they should be free of force, fear, and political considerations. The executive's gain of power seemed to have been curbed in recent years, with increased focus instead on the judiciary. Although many domestic and international laws and conventions aim to further judicial independence, this ideal is best feasible through a culture of integrity of the judiciary, the politicians, and the communities whom the judges serve. Perhaps a significant reason for the feasibility of unwritten laws and conventions United Kingdom in maintain law and order is the "culture of gentlemen". Reference Hartley, T., Griffith, J. "Government and Law." Second ed. Fakenham Press. London. 1981. Kirby, M. "Courts and Politics: Judicial Independence." Yale Law School. 2000. Retrieved from the World Wide Web: http://www.hcourt.gov.au/ Sueur, A., Sunkin, M. "Public Law." Longman. London. 1997. Turpin, C. "British Government and the Constitution Text, Cases and Materials." Fifth ed. Cambridge University Press. Cambridge. 2005. "Judicial Independence, Open Justice and Advance Sentence Indication." Crown Prosecution Service Retrieved from the World Web at: http://www.cps.gov.uk/ ...read more.