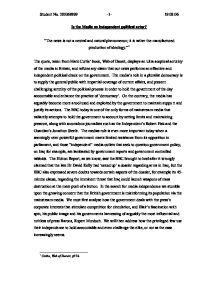 Is the Media an independent political actor?

Is the Media an independent political actor? "The news is not a neutral and natural phenomenon; it is rather the manufactured production of ideology."1 The quote, taken from Mark Curtis' book, Web of Deceit, displays an ultra sceptical scrutiny of the media in Britain, and refutes any claim that our news performs an effective and independent political check on the government. The media's role in a pluralist democracy is to supply the general public with impartial coverage of current affairs, and present challenging scrutiny of the political process in order to hold the government of the day accountable and enhance the practice of 'democracy'. On the contrary, the media has arguably become more a tool used and exploited by the government to maintain support and justify its actions. The BBC today is one of the only forms of mainstream media that valiantly attempts to hold the government to account by setting limits and maintaining pressure, along with anomalous journalists such as the Independent's Robert Fisk and the Guardian's Jonathon Steele. The medias role is ever-more important today when a seemingly over powerful government meets limited resistance from its opposition in parliament, and those "independent" media outlets that seek to question government policy, on Iraq for example, are lambasted by government reports and government controlled tabloids. The Hutton Report, as we know, saw the BBC brought to heel after it wrongly claimed that the late Dr David Kelly had 'sexed up' a dossier regarding arms in ...read more.

Furthermore 60% cited that they trusted television most, BBC1 scoring highest and Trevor MacDonald topping a poll of the most trusted newscasters. The broadcasting market has in recent years become a much more competitive one, companies constantly competing for audience retention, and the growing abundance of channels emerging on the cable and satellite scene pose a significant challenge to the existing dominance that the four major terrestrial channels currently exert. It is argued that the deregulation of British broadcasting, caused by the recent explosion of choice in the television industry, " ensures broadcasting's independence of the state"11 and arguably enhances the practice of a pluralist democracy in Britain. On the contrary BBC One and Two still retain around 40% of the audience, and together with ITV and Channel 4, make up over 80% of the broadcasting market in Britain, giving these major broadcasters the most influential positions in the British media. Broadcasting faces similar problems to the press in that both compete in a market that exists to maximise profits by increasing audiences. Mark Curtis addresses the chief pitfall and consequence of competition in the mainstream media, stating, "Stories have to attract audiences to sell to advertisers in competition with soap operas and game shows."12 Curtis also provides analysis of the role of the media with a rather condemning quote from a study conducted by Brian McNair of Stirling University, that concludes, "The news media of society tend to construct accounts of events which are structured and framed by the dominant values and interests of that society, and to marginalize (if not necessarily exclude) ...read more.

The replacement of hard-hitting and informative news in favour of more human-interest productions, along with the government's ability to intimidate broadcasters, like in 1986 when a Conservative report "almost certainly had some effect on the BBC's subsequent news and current affairs presentation,"23 displays how "the pluralist analysis of the medias role is inappropriate." Although the odd Channel 4 program and selective reporters for the Independent and the Guardian seek to uncover some of the darker secrets that the government wish to keep secret, their efforts seem to fall on deaf ears as their reports are only picked up by a minority of viewers and therefore never seem to generate the desired effect. Journalistic mavericks use the Internet to uncover truths and construct arguments that openly question and challenge British foreign policy but their efforts are swamped by mainstream spin and government propaganda and so the truth remains untold. The medias role in society is to produce clear, impartial accounts of current affairs and scrutinise or even challenge the actions of the government in order to contribute to a pluralist democracy. However the British media today reflects more a government institution, controlled to create a fa�ade of democracy and quell any challenges, in essence creating a system that preserves the status quo and the interests of the elite. "The news is not a neutral and natural phenomenon; it is rather the manufactured production of ideology. ...read more.