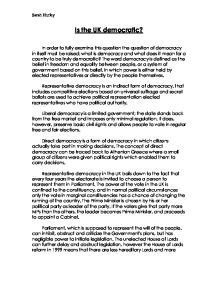 Is the UK democratic?

Is the UK democratic? In order to fully examine this question the question of democracy in itself must be raised; what is democracy and what does it mean for a country to be truly democratic? The word democracy is defined as the belief in freedom and equality between people, or a system of government based on this belief, in which power is either held by elected representatives or directly by the people themselves. Representative democracy is an indirect form of democracy, that includes competitive elections based on universal suffrage and secret ballots are used to achieve political representation elected representatives who have political authority. Liberal democracy is a limited government; the state stands back from the free market and imposes only minimal regulation. It does, however, preserve basic civil rights and allows people to vote in regular free and fair elections. Direct democracy is a form of democracy in which citizens actually take part in making decisions. The concept of direct democracy can be traced back to Athenian Greece where a small group of citizens were given political rights which enabled them to carry decisions. Representative democracy in the UK boils down to the fact that every four years the electorate is invited to choose a person to represent them in Parliament. The power of the vote in the UK is confined to the constituency, and in normal political circumstances only the vote in marginal constituencies has a chance of changing the running of the country. ...read more.

The media are the second non-democratic influence on the PM. Before his election, Tony Blair famously flew half way across the world to meet with Rupert Murdoch. Having convinced Murdoch that a Blair government would be friendly to the aims of free market capitalism, he was granted the support of the Murdoch press and broadcast media, which undoubtedly helped to secure Blair's huge majority. Business is another non-democratic influence on government. Major political parties are obliged to spend millions on advertising campaigns during elections. This money comes from business. Examples of this kind of influence can be repeated ad nauseam. The comparative powerlessness of the democratic vote is underlined by the fact that all major political parties are funded in the same way - so although voters have the option of voting for the Green Party, which receives no donations from industry, their wishes will not be represented in Parliament, since the UK electoral and broadcast system effectively excludes that group from UK politics, notwithstanding their slow advance at the local authority and European level. The European Union (EU) is the fourth constraint on the freedom of the British PM to enact the will of the UK electorate. The European Parliament is an elected body, but it has less power, if that is possible, than the House of Commons. ...read more.