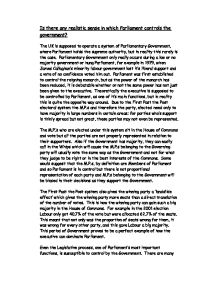 Is there any realistic sense in which Parliament controls the government?

Is there any realistic sense in which Parliament controls the government? The UK is supposed to operate a system of Parliamentary Government, where Parliament holds the supreme authority, but in reality this rarely is the case. Parliamentary Government only really occurs during a low or no majority government or hung Parliament, for example in 1979, when James Callaghan's minority labour government lost it's liberal support and a vote of no confidence voted him out. Parliament was first established to control the reigning monarch, but as the power of the monarch has been reduced, it is debatable whether or not the same power has not just been given to the executive. Theoretically the executive is supposed to be controlled by Parliament, as one of it's main functions, but in reality this is quite the opposite way around. Due to the First Past the Post electoral system the M.P.s and therefore the party, elected need only to have majority in large numbers in certain areas; for parties who's support is thinly spread but not great, these parties may not even be represented. ...read more.

For example in the 2001 election Labour only got 40.7% of the vote but were allocated 62.7% of the seats. This meant that not only was the proportion of seats wrong for them, it was wrong for every other party, and this gave Labour a big majority. This period of Government proves to be a perfect example of how the executive can dominate Parliament. Even the Legislative process, one of Parliament's most important functions, is susceptible to control by the Government. There are many stages of the process which are designed to prevent any one body controlling this but many are flawed and easily manipulated by the Executive. The first stage which can be noted is the Second Reading where the Bill is debated and then voted on in the House of Commons. If the Whips are called in then the M.P.s belonging to the Government will vote with in accordance to this and if it is a Government suggestion and there is majority, the law will pass this stage. ...read more.

Parliament, however, does have certain ways of controlling the Executive and their government. The Public Accounts Committee is chaired by a senior member of the opposition and is a Select Committee, which means it is permanent. This committee has the power to summon Ministers and make them explain the spending of their department. This means that they don't have infinite power to spend or do whatever they want. The National Audit Commission accounts for the spending and ensures minimal dishonesty and incompetence. However they still do not have the authority to compel ministers and civil servants to answer their questions. Another method of control is the Prime Minister's Questions, which means the Prime Minister can be asked any question and must explain himself to the House of Commons. As a last resort, Parliament can call for a Vote of No Confidence which means the M.P.s vote on whether or not to remove a Prime Minister or Government. There is also, of course the stages in the Legislative process but, as I have already discussed, they end up under the control of the Executive in the end. ...read more.