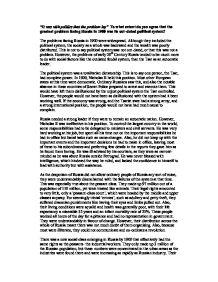 &quot;It was with politics that the problem lay&quot; To what extent do you agree that the greatest problem facing Russia in 1900 was its out-dated political system?

"It was with politics that the problem lay" To what extent do you agree that the greatest problem facing Russia in 1900 was its out-dated political system? The problems facing Russia in 1900 were widespread. Although they included the political system, the society as a whole was backward and the wealth was poorly distributed. This is not to say political system was not out-dated, or that this was not a problem. However, the problems of early 20th Century Russia tended to be much more to do with social factors like the outdated feudal system, than the Tsar as an autocratic leader. The political system was a totalitarian dictatorship. This is to say one person, the Tsar, had complete power. In 1900, Nicholas II held this position. Most other European states at this time were democratic. Ordinary Russians saw this, and also the notable absence in these countries of Secret Police prepared to arrest and execute them. This would have left them disillusioned by the unjust political system the Tsar controlled. However, the people would not have been as disillusioned with the system had it been working well. ...read more.

This was especially true about the peasant class. They made up 97 million out of a population of 110 million, yet were treated like animals. Their legal rights amounted to very little, only a 'peasant-class court', which were headed by the middle and upper classes anyway. For seemingly trivial 'crimes', such as adultery and petty theft, they suffered draconian punishments like having their eyes and limbs pulled out. Also, their living conditions were squalid and health was generally poor, with their life expectancy a miserable 35 years and an infant mortality rate of 25%. These people worked all hours of the day for a pittance and had no representation in government. They were understandably in favour of change. However, their distribution across the whole of Russia meant there was not much doubt of them organising. Also, because most were illiterate, they could not communicate and co-ordinate a revolution. There was a new social class emerging in Russia by 1900 that effectively had the same rights as the peasants- the industrial workers. They only made up 3 million of the Russian population, but these numbers were concentrated in the urban areas as the industries were found there and were increasing as rapidly as Russian industry. ...read more.

This alienated the countries and made their desire for self-government even greater. Even though they were not united as a class, they were as a nation unlike the other groups. The minorities were also made up of a variety of classes, including the educated classes, who could have therefore brought better leadership to the countries. This problem, however, was concentrated in specific areas and did not affect the whole of Russia. By way of conclusion, it is difficult to judge the greatest problem facing Russia in 1900. There were two real problems: the dissatisfaction amongst three groups- peasants, industrial workers and national minorities; and the discontentment with the political system experienced by most of the nation. Politics as a definition is the peaceful resolution of conflicts and the solution of problems, yet the Tsar and his political system in Russia were too weak to resolve these problems. Although a considerable factor in the problems of turn of the century Russia, the political system would not have been a problem if an effective leader had ruled it. It was more the inequality that the lower classes suffered that proved to be the greatest problem. ...read more.