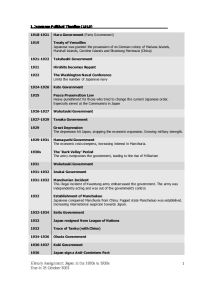 To begin the war-but not to be blamed for it-Japanese started the Manchurian Incident. On 18 September 1931, The South Manchurian Railway blowed up, The Japanese were blaming the local Chinese to have started it, although the evidence of who had done it were that of Japans. This was used as an excuse for the Kwantung Army to start invading Manchuria. "I believe that international justice and good faith are important, and I am striving to preserve world peace. [The Japanese invasion of Manchuria] causes me no end of anguish. This could result in intervention by the major powers and the destruction of our nation and people... When I think of all these problems I cannot sleep."2 -- Emperor Hirohito, regarding the Manchurian incident "The army's interference in domestic and foreign politics is a state of affairs of which... we must view with apprehension." -- Emperor Hirohito, regarding the army's involvement with Manchurian Inccident Lead up to Sino-Japanese War II b. Changes in Economy The Economic Expansion The Japanese economic expansion was a continuing development from the modernization previously achieved in the Meiji Restoration. The economy establishes and was soon rapidly growing, and the rulers adopted the slogan, "Rich Country, Strong Army". ...read more.

In addition, the Germans had the secret police Gestapo who ensure the obedience by terror. And for these reasons, the people had accepted the militaristic government. As one thing leads to another, a controlled economy is also a crucial part. A stable economy provides the capability to build and upkeep the army, to be commercially productive, and most of all, to keep the population content. Also, a centrally controlled economy gave the government the advantage to concentrate their resources on the military productions and or projects. Both Japanese and Germany had their previous government-which were badly affected by the 1929's Great Depression-ready to blame. Hitler had the Jews as the scapegoat for the problems experienced in the post-WWI. Last, but not the least of the totalitarian-state feature is control of the mass communications. Mass media communications ranged from newspaper, books, magazines publications, radio broadcasts. The sources of information were censored to favour the government (or the ruling-party Nazi in Germany). The impact was that it directs the citizens of both empires to believe and support the acts of the government. A leader, an ideology, an army, the economy, the scapegoats and the communications, each had been taken to extreme and became the features in the creation and the existence of a Totalitarian state. VI. ...read more.