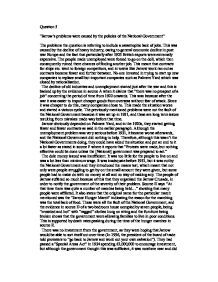 &quot;Jarrow's problems were caused by the policies of the National Government&quot;.

Question 5 "Jarrow's problems were caused by the policies of the National Government" The problems the question is referring to include a catastrophic lack of jobs. This was caused by the decline of heavy industry, owing to general economic decline in post war Europe and the fact that particularly after 1925 British exports were extremely expensive. The people made unemployed were forced to go on the doll, which then consequently ruined there chances of finding another job. This meant that contracts for ships etc. went to foreign competitors, and in towns like Jarrow work ran out as contracts became fewer and further between. No-one invested in trying to start up new companies to replace small but important companies such as Palmers Yard which was closed by rationalisation. ...read more.

Therefore, although this wasn't the National Governments doing, they could have aided the situation and put an end to it a lot faster as stated in source F where it reports that "Protests were made, but nothing effective could be done unless the [National] government was prepared to act." The dole money issued was insufficient. It was too little for the people to live on and was a lot less than minimum wage. It was inadequate before 1931, but it was cut by the National Government and they introduced the means test, which meant that not only were people struggling to get by on the small amount they were given, but some people had to make do with no money at all and no way of making any. ...read more.

They had passed a "Special Areas Act" in 1934 spending �2,000,000 to encourage investment, but although the government thought this was sufficient, it was nowhere near and did next to nothing in improving the situation, yet still, the National Government was intent it could do no more. In 1934, rationalisation caused Palmers Yard to close down. This was an idea hatched by the National Government. They did not attempt to assist the people of Jarrow find new employment, although the unemployment rate had peaked beforehand 1934 reaching numbers of 7,178, but going down to 6,462 after the closing of the ship yard. In conclusion, most of the points covered were not directly caused by the National Government or their policies, but rather than attempt to resolve them, they left them to get worse. ...read more.