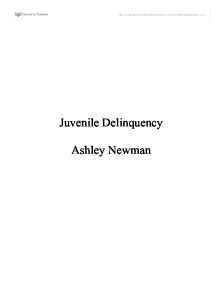 Juvenile Delinquency Ashley Newman Children are most known for playing with toys, getting dirty, and laughing like there is no tomorrow. But now, some kids as young as nine years old are turning into what we never wanted them to become; criminals. The cause for this can be many things, such as a bad childhood, or peer pressure. Regaurdless of the causes, Americans are becoming concerned that our happy, playful children are growing up too fast, and causing our criminal rates to skyrocket. But how should they be punished? Juvenile offenders are becoming a question to society; should they be punished as if they were adults and be put to jail and death row, or should we treat them like childred, and cut them some slack? To many people, if the crime is bad enough, juveniles should be put to death row, and no free rides should be given to kids under the age of 18. If our juvenile system is considered best in the world, then the rest of the world must be having serious problems with there systems. The purpose of the death penalty is to protect our nations future and to give no mercy. If adults can be sent to death row, why can't teens? If teens think they have the mental abilities to make these decisions, they should take responsibility for there actions. ...read more.

To many, America is taking the easy way out with serious offenders and are just putting them to there death like it is no big deal. Instead of just pushing the problem away, why don't we just try and solve it? Yet another reason why the death penalty is not suitable for young adults is that an average juvenile's brain is less developed than an adult's brain. The effect on this could be that they would not be able to comprehend the consequences of situations, and it can be a huge factor of making wrong decisions. Overall, juveniles have less impulse control than adults, so they should not be punished for something they could not change. (Abramsky p. 2) Hours before Napoleon Beazley died in a Texas execution chamber, he spoke his final words. "The act I committed to put me here was not just heinous, it was senseless, but the person that committed that act is no longer here- I am. I'm not going to physically struggle against any restraints. I'm not going to snout, use profanity or make idle threats. Understand though that I'm not only upset, but I'm saddened by what is happening here tonight. I'm not only saddened, but disappointed that a system that is supposed to protect & uphold can be so much like me when I made the same shameful mistake." ...read more.

This shows that teens are not learning there lesson from being put in jail, and we obviously need to change our ways of punishment. Not only could the teens put into adult prisons be permanently changed by being either physically or sexually abused, they will be taken out of there academic courses, causing there chances of unemployment to be higher. (Anderson p.3) We need to find a way that can give the juvenile delinquents a chance to learn while they are being punished for the future of the United States and the child. Every seventeen seconds of our life, someone commits a violent crime. (Abramsky p.3) Some of these crimes are our very own hormone raging, summer loving teenagers and kids. To many, this is a surprise that our once kind and pleasant kids of America are becoming violent and full of hatred. With the new topic of juvenile delinquency arising, we are now facing an even newer problem. How are we to punish those who are not considered an adult? With many opinions, we are wondering if they should be treated as if they were older and be able to be put to death and go to jail, or should they be let off the hook? The problem is still a question to all, but in years to come we will discover the true answer. ...read more.