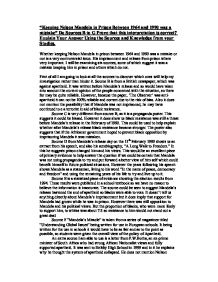 &quot;Keeping Nelson Mandela in Prison Between 1964 and 1990 was a mistake&quot; Do Sources B to G Prove that this interpretation is correct? Explain Your Answer Using the Sources and Knowledge from your Studies.

"Keeping Nelson Mandela in Prison Between 1964 and 1990 was a mistake" Do Sources B to G Prove that this interpretation is correct? Explain Your Answer Using the Sources and Knowledge from your Studies. Whether keeping Nelson Mandela in prison between 1964 and 1990 was a mistake or not is a very controversial issue. His imprisonment and release from prison where very important. I will be examining six sources, some of which suggest it was a mistake keeping him in prison and others which do not. First of all I am going to look at all the sources to discover which ones will help my investigation rather than hinder it. Source B is from a British newspaper, which was against apartheid. It was written before Mandela's release and so would have taken into account the current opinion of the people concerned with the situation, so there for may be quite reliable. However, because the paper, 'The Observer' was anti-apartheid it can not be 100% reliable and correct due to the risk of bias. Also it does not mention the possibility that if Mandela was not imprisoned, he may have continued to e a terrorist in aid of black resistance. Source C is very different from source B, as it is a propaganda poster. ...read more.

It has turned an ordinary man into a saint." This source published by the observer on the 17h August 1988 also goes onto say that if Mandela hadn't have gone into prison he would have displayed weakness like all other political leaders. This suggestion is coming from someone with a particularly strong view that Mandela's imprisonment was a mistake for the white Afrikaans. Source F also suggests that Mandela was very important for the transition from white oppression to black rule. "Mandela has shown himself to be the great peacemaker, remarkably free of bitterness after his bitterness after his 27 years in prison. His heroes stature has been further increased by his ability to work amicably with his former jailers." What this source suggests is slightly different to what source B suggests. Source F has the opinion that Mandela was a world class statesman whose talents were wasted in prison, where as source B is in the opinion that if Mandela had not gone into prison he would have "displayed weakness like all other political leaders." It is difficult to say whether Mandela would have become the same person, as we will never actually know. Also from prison Mandela would have been able to see the failure of the violence towards the white Afrikaners and so may have decided to change from a terrorist to a peacemaker because of this. ...read more.

If this attitude was continued there may have been several more years of conflict and violence. However when he came into power Mandela decided not to gain revenge by reversing the situation and beginning an era of black oppression and instead became the peacemaker between the two races, this meant the aggravation between the two races could begin to stop. From looking at all the evidence and having the use of my own knowledge I still believe it is difficult to find out whether Mandela's imprisonment was a mistake or not. After analysing all the sources together we are able to see the fuller picture, however when looking at some sources individually we can see that they do not prove a specific point. This is most present in sources C, the poster issued in 1985 by the United Democratic Front (UDF), as there is no real link to Mandela's imprisonment and the issue of whether it was a mistake or not. Also in source E, the election results from 1994 from a book written for use in British schools entitled "South Africa 1948-94" by Rosemary Mulholland. Again there is no real link with his imprisonment and the actual question for which we are analysing the sources. However it does suggest more relevant for which I have been able to use in the answering of this question, such as how Mandela's imprisonment increase support for the ANC and such like. ...read more.