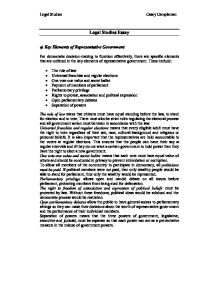 Legal Studies Essay a) Key Elements of Representative Government For democratic decision-making to function effectively, there are specific elements that are outlined in the key elements of representative government. These include: * The rule of law * Universal franchise and regular elections * One vote one value and secret ballot * Payment of members of parliament * Parliamentary privilege * Rights to protest, association and political expression * Open parliamentary debates * Separation of powers The rule of law states that citizens must have equal standing before the law, to stand for election and to vote. There must also be strict rules regulating the electoral process and all government action must be taken in accordance with the law. Universal franchise and regular elections means that every eligible adult must have the right to vote regardless of their sex, race, cultural background and religious or personal beliefs. ...read more.

The right to freedom of association and expression of political beliefs must be protected by law. Without these freedoms, political ideas would be subdued and the democratic process would be restricted. Open parliamentary debates allow the public to have general access to parliamentary sittings so they can make their decisions about the worth of representative government and the performance of their individual members. Separation of powers means that the three powers of government, legislative, executive and judicial, must be separate so that each power can act as a preventative measure in the misuse of government powers. b) Describe the division of powers between the states The division of powers can be illustrated showing the relationship between the commonwealth and state powers. Power is divided between the commonwealth and the states. ...read more.

Examples that restrain the commonwealth include: * Taxation must not discriminate between states or parts of states. * Property must be acquired on just terms. * The commonwealth is prohibited to make laws about religion. The states are given the residual power residing in the constitution. This means that the states are allowed to make laws in the subject areas not formally written in the constitution. Theses areas include: * Civil and criminal law * Environment * Women and children * Public health, education and housing Many of the heads of power are concurrent with the states. This means that both the commonwealth and the states can make laws on them. The inconsistency rule was included to deal with the possibility of differing federal and state law. Section 109 states; When a law of a state is inconsistent with a law of commonwealth, the latter shall prevail, and former shall, to the extent of the inconsistency, be invalid. Legal Studies Casey Campleman ...read more.