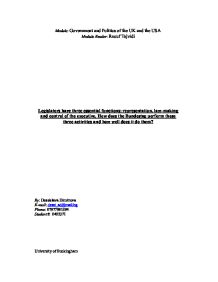 Legislators have three essential functions: representation, law-making and control of the executive. How does the Bundestag perform these three activities and how well does it do them?

Module: Government and Politics of the UK and the USA Module Reader: Raouf Tajvidi Legislators have three essential functions: representation, law-making and control of the executive. How does the Bundestag perform these three activities and how well does it do them? By: Dessislava Dimitrova E-mail: [email protected] Phone: 07977981394 Student #: 0402371 University of Buckingham The 20th century history of Germany is divided into four periods according to the form of government it has had; namely the Weimar Republic (1919-1933), the Third Reich (1933-1945), West and East Germany (1949-1989) and the Federal Republic of Germany. It is in the latter that the country finally has been united, with an effective form of government, which guards the natural rights of its citizens and simultaneously looks after the economic interest of state. The purpose of this essay is to explain how the lower house of the German Parliament, the Bundestag, performs its functions and how well does it do that. As the question itself is divided into two subsections, consequently the paper is going to follow the same scheme. In the first part there are to be observed the tasks of representation, law-making and control of the government. The second part of the essay is to evaluate the efficiency with which the Bundestag achieves the upper-mentioned. Representation, being one of the main features of modern democracy, is also a fundament in the German Bundestag. It is the only directly elected by the people body in the Bundes government. In order for one to appreciate the level of representation there should be explained the method by which the members are elected. In fact, the electoral system of the Bundestag is a symbiosis between proportional representation and first-past-the-post. That means that one half of the seats, determined in a first vote, go to a candidate for each constituency. The other half, elected in a second vote goes to a list of candidates from different political parties, assigning each party a certain number of seats in proportion to the election results. ...read more.

It can do so by menas of written formal question or set of questions introduced by a group of members collectively. * When one thinks about the power of the Bundestag to control the executive he/she should be aware of the fact that in the German parliament the most important factor which makes government so effective is critical cooperation; meaning that the members of Parliament are much more interested in making the government more effective through making suggestion to bills and policy rather than to opposing it. * According to democratic theory and the German Basic Law, the Bundestag, directly elected by the sovereign people, has precedence over the other two "powers", i.e. the executive and the judiciary * Remembering their experience with the Weimar Republic, whose head of government was responsible to both parliament and the president as Head of State, they made sure that the executive branch of government, the Chancellor with his cabinet, is politically responsible to the Bundestag and is elected by its members by secret ballot * This is the reason why bills may only be adopted by the Bundestag: its debates are public - they are covered by the press, radio and television - and the only people who may participate in taking the decision on each bill are the elected Members of the Bundestag (the number laid down in the Federal Electoral Act is 598; on account of overhang mandates there are currently 603 Members). Because laws are rules binding on the entire people, they must be considered and adopted by Parliament. * Elective function- chancellor-majority. The Bundestag members are the only federal officials directly elected by the public; the Bundestag in turn elects the Bundeskanzler and, in addition, exercises oversight of the executive branch on issues of both substantive policy and routine administration. This check on executive power can be employed through binding legislation, public debates on government policy, investigations, and direct questioning of the chancellor or cabinet officials. ...read more.

* Interest groups gathering and consulting: ( by nature they represent part of the population sharing comon values, interests or occupations) ex. In the years between 1972 to 1987 over half of the members were affiliated in some interest group.) one must realize that these groups do not act arbitrarily on behalf of a few individuals, but in principle represent the justified interests of social groups. Individual citizens, whether they be tradesmen or businessmen, members of a specific occupational group, recipients of state benefits or simply supporters committed to a specific cause, are hardly in a position to assert viewpoints alone without joining forces with like-minded people. If they take their concerns seriously, they will join a party or relevant association, organization or citizens' action group and help put the ideas they share into practice. Parliament too is dependent on the involvement of interested groups affected by the planned legislation. For one thing, they have considerable expertise in the field concerned, without which the Bundestag would find it difficult to draw up just and appropriate provisions. On the other, it is legitimate and useful for the Bundestag to learn of the misgivings and concerns of the affected groups in good time and possibly take them into consideration, because a bill cannot normally be pushed through by force but is dependent on being accepted and observed by those affected. In taking interests systematically into account, it is important to hear not just one viewpoint but also others which may reflect different and perhaps even conflicting interests in the same field. Thus, in the case of labour law provisions, not only the employers are heard but also the trade unions; * Women representation has increased throughout the years forming one of the highest proportions of female members in any European parliament Committees (all- standing and ad hoc0 established on the basis of proportional representation. The chairmanships in all committees are also distributes to the various party caucuses on a proportioanl basis. Even minority opposition parties having no less than 25 members are eligible to head on or several committees * ...read more.