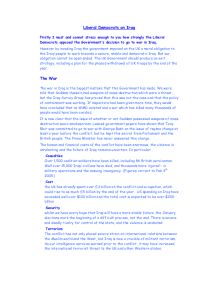 Liberal Democrats on Iraq Firstly I must and cannot stress enough to you how strongly the Liberal Democrats opposed the Government's decision to go to war in Iraq. However by invading Iraq the government imposed on the UK a moral obligation to the Iraqi people to work towards a secure, stable and democratic Iraq. But our obligation cannot be open-ended. The UK Government should produce an exit strategy, including a plan for the phased withdrawal of UK troops by the end of the year. The War The war in Iraq is the biggest mistake that this Government has made. We were told that Saddam Hussein had weapons of mass destruction which were a threat, but the Iraq Survey Group has proved that this was not the case and that the policy of containment was working. If inspectors had been given more time, they would have concluded that no WMD existed and a war which has killed many thousands of people would have been avoided. It is now clear that the issue of whether or not Saddam possessed weapons of mass destruction was a smokescreen. Leaked government papers have shown that Tony Blair was committed to go to war with George Bush on the issue of regime change at least a year before the conflict, but he kept this secret from Parliament and the British people. ...read more.

Charles Kennedy has regularly tackled Tony Blair on Iraq at Prime Minister's Questions, and we have used several of our precious opposition day debates to force the Government to answer questions on their actions in Iraq and the poor and inadequate intelligence that has lain behind them. We have sought to ask hard questions and provide effective opposition to the war - speaking up for the many British people who were opposed to sending our troops to Iraq. This was in contrast to the Conservatives, who acted as cheerleaders for war, saying we should not allow a cigarette paper's width between the British and American positions. We are continuing to challenge the Government on Iraq. Unprecedentedly, our amendment to the motion to approve the Queen's Speech (the Government's programme of legislation) in December 2004 focused on a single issue - the wide-ranging powers of prerogative that the British Prime Minister has over matters of war and peace. The Hutton and Butler Inquiries investigated aspects of the run-up to war, but neither of them examined the full political, legal and strategic advice given to the Prime Minister before the war, nor the Prime Minister's competence and judgment in the light of that advice. ...read more.

Overwhelmingly, the Iraqi people wish to see coalition forces leave in the near future - a call of echoed by virtually all the political parties that participated in the recent elections. Withdrawal of coalition forces would support and entrench the full restoration of sovereignty to the Iraqi people. � Legality The presence of coalition forces (MNF) in Iraq is authorised by UN Security Council Resolutions 1511 and 1546. The mandate is due to expire in December, more than two and half years after the invasion; any deployment beyond this time would be unlawful unless sanctioned by the Iraqi government or a new Security Council Resolution. Priorities The immediate priorities of the MNF and the new government should be to: � Re-establish security, law and order, particularly in the Sunni provinces, primarily through strengthening Iraqi security forces. � Affect a graduated transfer of responsibility for security from Multi-national to Iraqi forces. � Encourage and support the involvement of representatives of all minorities - especially Sunnis - in Iraqi politics, at both national and local levels; ensure such groups have the opportunity to contribute to the framing of a constitution. � Improve the delivery of public services; in particular to ensure adequate supplies of food, water, sanitation and electricity; and to address high levels of unemployment. ...read more.