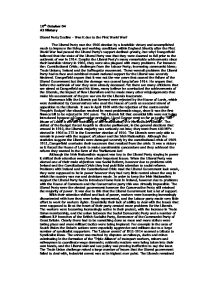 Liberal Party Decline - Was it due to the First World War?

10th October 04 A2 History Liberal Party Decline - Was it due to the First World War? The Liberal Party won the 1906 election by a landslide victory and accomplished much to improve the living and working conditions within England. Shortly after the First World War had passed the Liberal Party's support declined greatly, but why? Dangerfield believed that the state of the Liberal Party was that they were doomed to fail prior to the outbreak of war in 1914. Despite the Liberal Party's many remarkable achievements since their landslide victory in 1906, they were also plagued with many problems. For instance the: Constitutional Crisis; challenges from the Labour Party; increasing communist ideas; Trade Unions; Ireland and the Suffragette movement. These were all problems the Liberal Party had to face and combined meant national support for the Liberal was severely hindered. Dangerfield argues that it was not the war years that caused the failure of the Liberal Government but that the damage was caused long before 1914. He argues that before the outbreak of war they were already deceased. Yet there are many criticisms that are aimed at Dangerfield and his ideas, many believe he overlooked the achievements of the Liberals, the impact of New Liberalism and he made many other misjudgements that make his assessment of the pre war era for the Liberals inaccurate. ...read more.

Clearly there had to be something done as more and more strikes were taking place and more militant tactics were being implored. For example in the area of South Wales the Union's actions were especially aggressive and militant due to a large number of syndicalist supporters. The 'Labour unrest' of 1911-1914 seemed a tribute to Syndicalist ideas. The unrest was marked by disputes on railways, docks and mines culminating in the formation of the 'Triple Alliance' of transport workers, miners and railwaymen to coordinate wage demands; evidently matters were being taken into their own hands, and the Liberal wait and see policy was proving ineffective to say the least. The Trade Union challenge raised a large number of issues that the Liberal government failed to deal with, industrial unrest was at its highest ever point. The Liberals remained largely detached from the workers, as did the Labour Party; they left it to the employees themselves to sort out, explaining the more extreme strategies that appeared. The Liberals were in a very difficult position; they did not want to lose the support of the employers, who gave them financial support, by intervening in disputes. They made no real attempt to prevent strikes; instead they acted very harshly when they did by using the army. ...read more.

reform and personal freedom at all, but rather they were reinforcing the ideas in a society of male dominance that they were supposed to be eradicating. The war halted the suffragette movement as it called for national unity; this again suggests to me Dangerfield is off the mark as he does not consider the impact the war had on problems facing the Liberals. Although the Liberal Government faced many problems during their time in power, they were still able to achieve many successes. The Liberals did not have an easy time in government, but fought their battles valiantly, introducing social reform on the way. Election results also suggest that the Liberal Government were not heading for failure but proceeding to continue strongly. I therefore contradict Dangerfield's theory that the Liberal government were doomed to failure prior to World War 1, suggesting that they were still a strong government. It would be easy to make assumptions looking back in hindsight as Dangerfield did, however I would argue that upon entering World War 1 the Liberal Party still appeared to be strong. Unfortunately the nature of the pre war years seem to accentuate the problems and cast a shadow over the achievements, Dangerfield is a clear critique of Liberal England and what it has to offer. ...read more.