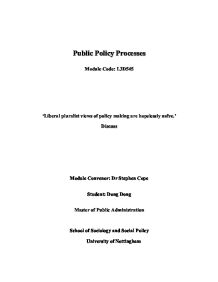 Public Policy Processes Module Code: L3D545 'Liberal pluralist views of policy making are hopelessly na�ve.' Discuss Module Convenor: Dr Stephen Cope Student: Dong Dong Master of Public Administration School of Sociology and Social Policy University of Nottingham There has been a debate about the feasibility of pluralist theory in interpreting the policy making process in the western countries since 1950s.This essay will examine whether the pluralist theory accurately describes the policy making process in society, in other words, to what extent can pluralist theory explain how decisions are make in government. Since pluralism is a set of vague ideas and changing all the time, it is difficult to give a specific definition of pluralism. Pluralists deem society to be complex and interdependent, focus on the importance of interest groups who are in interaction with government, although the power and the resources that contribute to power are unequally distributed among groups, there is no elitist group or ruling class in the political arena and they believe the widely distributed power can ensure any grievance gain access to the decision making process. They think policies are made through bargaining, negotiating and compromising between different interests. Hewitt (1974:61) pointed out that the policy making could not be elitist since no elite or interest group is dominant, and because of the existence of conflicting interests in different issues, there is no group could benefit consistently from decisions. The first part of this essay will analyze the pluralism in the context of policy making process. first, we will examine the incrementalism and then present two major flaws of pluralism:1overestimating the role of pressure groups,2wrong methodology. Furthermore, giving two examples where pluralism absolutely cannot be applied. Finally this essay will conclude that pluralism may be possible in policy-making but only in certain policy areas. In most cases it is hopelessly na�ve. Pluralism also has a geographic limitation. As it is a western philosophy, it may not be applicable to eastern countries such as China and Korea whose cultures, ideology and history are completely different from western countries. ...read more.

defined as non-decision making that uses means such as force to prevent issues that challenge the existing values from entering the political process. They suggest the importance of analyzing what does not happen and why does not happen, since they are an integral part of examining the power structure. In pluralist view, in the advent of an issue, different interests sit together discussing, negotiating and comprising to form a consensus. However this consensus to what extent reflects the general acceptance of values in society is disputable, as powerful interests often use non-decision making usually to keep counterviews out of political agenda. There are some grievances that are killed before they enter the decision-making. An example is the white terrorization of civil rights workers in the southern America (Hill 1997:39). This example proved the existence of non-decision making and how it functions. In practice, only analyzing the actual decision cannot reflect what really happen and how the second face of power exercises in political arena to maintain the status quo. The opposite of pluralism The best way to refute pluralism is to prove the existence of ruling class. Although pluralists accept that some interests are privileged, they never accept the existence of ruling class. However, in some cases we must admit the existence of ruling class, Such as Chile, in 1973, the army leaders took over the government, forming the military government. Since 1973 military government has dominated policy-making process and eliminated rival interests. And the same situation can be found in Libya. As governments in Chile and Libya both control the army, a crucial resource that contributes to power, they control the whole political process and rule the society. These two cases prove the existence of ruling class and that in some circumstances, a resource that contributes to power can privilege over all others, which directly fly in the face of pluralism. So in countries such as Chile and Libya, pluralism does not apply at all. ...read more.

In fact, other departments cannot and do not intend to exercise influence on this policy, as police is a very powerful department in Chinese society, other departments need its support to enforce their own policies. Even if other departments suggest some alternatives to them, they will not adopt the alternatives if theses suggestions are not in line with their interests and goals. So the existence of Whitehall pluralism advocated by pluralists is quite questionable. Finally, if we interpret this case using the pluralist method of analyzing actual decisions, we would make a big mistake, as there is a latent interest conflict from non-local residents that cannot become a matter that calls for decision. They see the lack of conflict as a general acceptance among the whole population. The temporary residents certificate has been implemented for 20 years, there is no expression of grievances that has been on the decision-making agenda. As if non-local residents and other interests have compromised with the government and they have reached an agreement. However, we should explore what really happened behind this hypothetic agreement. First, people who dare to challenge this regulation such as not applying for the certificate were arrested and had to pay penalty to be free. This is a good example of non-decision making, which pluralists turn a blind eye to. The government uses non-decision making to suppress this unfavorable issue to enter the decision-making process. Second, we should mention another way in which power exercises, namely, anticipated reaction. In this case, non-local residents anticipate that the police would arrest and fine them, if they do not have the temporary resident certificate. So this case demonstrates that pluralist method for analyzing policy is inadequate and the existence of unobservable power. In conclusion, we can see that the main principles of pluralism cannot apply to this case. In this case, the decision makers do amend the policy incrementally, but the only actors are themselves, 'partisan mutual adjustment' never happens. Although we cannot refute the whole pluralist theory by this case, at least it demonstrates that pluralism has a big limitation on interpreting how policy is made. ...read more.