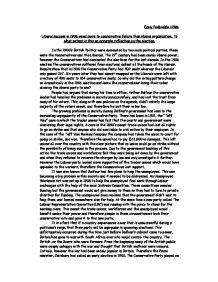 Liberal success in 1906 owed more to conservative failure than liberal organization, To what extent is this an accurate reflection on the election.

Emily Podbielski 12RM Liberal success in 1906 owed more to conservative failure than liberal organization, To what extent is this an accurate reflection on the election. In the 1900's British Politics were dominated by two main political parties, these were the Conservatives and the Liberals. The 19th century had been mainly liberal power, however the Conservatives had dominated the elections for the last decade. In the 1906 election the conservatives suffered from electoral defeat at the hands of the liberals. Results show that in 1900 the Conservative Party had 402 seats whereas the Liberals only gained 157. Six years later they had almost swapped as the Liberals were left with a victory of 400 seats to 184 conservative seats. So why did the voting pattern change so dramatically in the 1906 election and leave the conservatives losing their votes allowing the liberal party to win? People had argued that during his time in office, Arthur Balfour the conservative leader had handled the problems in society unsuccessfully, and had lost the trust from many of his voters. This, along with new policies on the agenda, didn't satisfy the large majority of the voters needs, and therefore he lost their votes too. The growing problems in society during Balfour's government had lead to the increasing unpopularity of the Conservative Party. There had been in 1901, the "Taff Vale" case in which the trades unions had felt that the courts and government were dismissing their legal rights. ...read more.

This action coming so soon to Britain's humiliation in the Boer War, reminded people the methods of concentration camp ideas and showed that it was barbaric to keep any human being in such conditions, also within these conditions people worried about the morally wrong issue of homosexuality. There were a number of different acts that were placed during the conservative power that lost them votes in the 1906 election. Education had been a let down for the country in times before and the government had seen to change it. The Education Act of 1902 was therefore set up to provide better education to fill the inadequacy in secondary school education. They proposed a number of different policies to cause a new set up for secondary education across Britain. They consisted of; abolishing the old school boards and letting Local Education Authorities, (LEA's) have responsibilities for education, and they wanted to expand education so that more children could attend grant paid and grammar schools. Although there were many changes that were highly useful and that were still in place twenty years ago. Many of the new changes angered groups like the Non Conformists, who were a group of religious Protestants who wanted political, social and religious equality with the Anglicans and other religions. This new act had angered them, as it had meant church schools gained money in a bid to expand this type of education and they wanted it to fade away. This therefore meant a loss of their votes to the Conservative Party and more support to the liberals who promised to abolish the Education act if they came to power. ...read more.

The other problem was that if the public, who disapproved of the Conservatives, voted a mixture of Liberal and Labour there was still a chance that the Conservatives would win the election, as they would always have a number of upper class supporters. To solve this problem, the Liberals decided to team up with Labour so that they would win the majority. Their plan worked, and they avoided the three horse race situation. Thirty out of the twenty-nine constituencies that had stood with the "Lib/Lab" alliance had won the elections. However the Liberals knew that with only fifty seats in parliament, Labour had no chance of winning the election, They only used them to get rid of the Conservative opposition and get a foothold in parliament. To counteract all of the Conservative Failures, The Liberal party ran with the opposite to everything the Conservatives believed. They promised to oppose food taxation, to make food cheaper for the poor, Go against Tariff Reform and support Free Trade, Repeal the Education and Licensing acts which please Non Conformists, and reverse the Taff Vale judgement. This therefore gained the Liberals all the votes from the Non Conservative supporters and led to them winning the election. The Conservative failures in the 1906 elections, had played a big part in the victory of the Liberal Party, However, This was not only the reason for their winning. The Liberals had used their initiative to counteract Conservative policies and gain opposing votes. I therefore think that this is a semi accurate reflection of the election, as it was one of the main reasons for their victory. Word count = 1969 words ...read more.