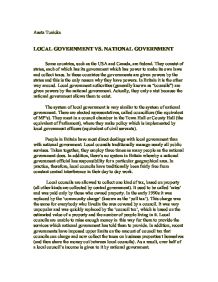 Aneta Tunicka LOCAL GOVERNMENT VS. NATIONAL GOVERNMENT Some countries, such as the USA and Canada, are federal. They consist of states, each of which has its government which has power to make its own laws and collect taxes. In these countries the governments are given powers by the states and this is the only reason why they have powers. In Britain it is the other way around. Local government authorities (generally known as "counsils") are given powers by the national government. Actually, they only exist because the national government allows them to exist. The system of local government is very similar to the system of national government. There are elected representatives, called councillors (the equivalent of MP's). They meet in a council chamber in the Town Hall or County Hall (the equivalent of Parliament), where they make policy which is implemented by local government officers (equivalent of civil servants). ...read more.

It was very unpopular and was quickly replaced by the 'council tax', which is based on the estimated value of a property and the number of people living in it. Local councils are unable to raise enough money in this way for them to provide the services which national government has told them to provide. In addition, recent governments have imposed upper limits on the amount of council tax that councils can charge and now collect the taxes on business properties themselves (and then share the money out between local councils). As a result, over half of a local council's income is given to it by national government. The modern trend has been towards greater control by central government. This is not just a matter of conntrolling the way local government raises money. ...read more.

In 1976, for example, a Labour government told all local authorities to arrange secondary education on non-selective lines, forcing them to combine the traditionally seperate schools for children deemed to be of higher and lower ability at the early age of 11. A few local authorities successfully defied the government. The long-cherished independence of local government, however, has been slowly eroded over the years by a variety of processes. In the 19th century the majority of candidates were independent citizens, concerned solely with the well-being of their town or country. From the late 19th century onwards, however, national political parties began to sponsor candidates in local elections. In this way political loyalties at a national level began to displace local considerations and determine how people voted. Today there are virtually no independent candidates left, except in one or two remote rural areas. ...read more.