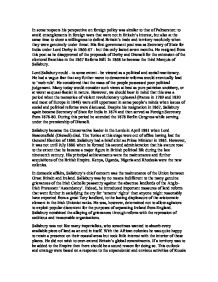 In some respects his perspective on foreign policy was similar to that of Palmerston: to avoid entanglements in foreign wars that were not in Britain's interest, but also at the same time to show a willingness to defend Britain's trade and territory resolutely when they were genuinely under threat. His first government post was as Secretary of State for India under Lord Derby in 1866-67 - but this only lasted seven months. He resigned from this post as he disapproved of the proposals of Derby and Disraeli for the extension of the electoral franchise in the 1867 Reform Bill. In 1868 he became the third Marquis of Salisbury. Lord Salisbury could - to some extent - be viewed as a political and social reactionary. He had a vague fear that any further move to democratic reforms would eventually lead to `mob rule'. He considered that the mass of the people possessed poor political judgement. Many today would consider such views at best as pure patrician snobbery, or at worst as quasi-fascist in nature. However, we should bear in mind that this was a period when the memories of violent revolutionary upheaval (France in 1789 and 1830 and most of Europe in 1848) were still uppermost in some people's minds when issues of social and political reforms were discussed. ...read more.

A less level-headed leader could easily have blundered into a war with any one of these nations, even over `small' incidents like the French incursion into the Upper Nile or Russian activity in the East. Salisbury was not a demagogue. Nor was his an idealistic style of leadership. He was a `management man' - though an effective one. He appreciated that a combination of skilful diplomacy and reserves of military strength were fundamental in order to preserve Britain's power on the world scale. The Boer War (1899-1902) cast a shadow over his declining years and covered the last three years of his fourth and final premiership. The Boers could not be dealt with in the same way as the political representatives of Paris, Berlin or St. Petersburg. A different approach to the problem was needed to solve this unique situation. Salisbury died in 1903 before this could be fully realised. The rights and wrongs of the South African war are complex. The hostility of President Kruger of the Transvaal to British interests and his personal bellicosity, combined with his policy of seeking German intervention in South African affairs at a time when Germany was well established in East Africa and South West Africa, would have troubled the most pacific British government. No small measure of war guilt is attributable to `Oom Paul's' unrealistic Boer ultra-nationalism, egotism and reckless overplaying of his hand, not to mention his tendency to underestimate Great Britain very badly. ...read more.

Rosebery's ministry was defeated in 1895 on a vote on the Army Estimates and Salisbury formed a coalition government with the Duke of Devonshire and Joseph Chamberlain until an election could be held. Chamberlain had taken a substantial number of Liberal MPs over to the ranks of the Conservatives because they disagreed with Gladstone's attempts to give Home Rule to Ireland. Having split the Liberal Party in the 1880s, Chamberlain went on to do the same to the Conservative and Unionist Party in 1903. This ministry passed the Workmen's Compensation Act in 1897 and a Local Government Act for Ireland in 1898. In the reconstructed administration of 1900 there were so many of Salisbury's relations holding office that it was nicknamed the 'Hotel Cecil'. During this part of the ministry, relations with the Boers living in the South African Republic (the Transvaal and the Orange Free State) deteriorated over the rights of the "foreigners" to vote: Paul Kruger had no intention of allowing the Boers to be outnumbered by other settlers. In October 1899 the Boer War broke out, ending only in May 1902 with the Treaty of Vereenging. As his health failed, Salisbury handed over the Foreign Office to Lord Lansdowne; in July 1902 he resigned as PM on the grounds of ill health and was succeeded by his nephew, Arthur Balfour. ...read more.