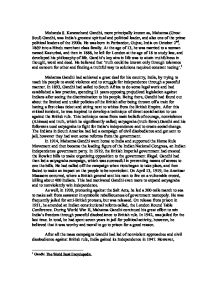 Mohanda S. Karamchand Gandhi, more principally known as, Mahatma (Great Soul) Gandhi, was India's greatest spiritual and political leader, and also one of the prime political leaders of the 1900s. He was born in Porbandor, Gujrat, India on October 2nd, 1869 into a Hindu merchant class family. At the age of 13, he was married to a woman named Kasturbai, and then in 1888, he left for London at the age of 18 to study law, and developed his philosophy of life. Gandhi's key aim in life was to attain truthfulness in thought, word and deed. He believed that 'truth could be known only through tolerance and concern for other and finding a truthful way to solutions required constant testing'.1 Mahatma Gandhi had achieved a great deal for his country, India, by trying to teach his people to avoid violence and to struggle for independence through a peaceful manner. ...read more.

In 1914, Mahatma Gandhi went home to India and supported the Home Rule Movement and then became the leading figure of the Indian National Congress, an Indian Independence government party. In 1919, the British Imperial government had created the Rowlatt bills to make organizing opposition to the government illegal. Gandhi had then led a satyagraha campaign, which was successful in preventing means of access to one the bills. He had called off the campaign when riots began to take place, and then fasted to make an impact on the people to be nonviolent. On April 13, 1919, the Amritsar Massacre occurred, where a British general sent his men to fire on a vulnerable crowd, killing about 400 Indians. This had motivated Gandhi even more to expand satyagraha and to nonviolently win independence. ...read more.

On January 13, 1948, Gandhi began his last fast, and his reason was to end the violence among Hindi, Muslim and others. On January 18, he ended his fast when the leaders vowed to stop the warfare. Then on January 30, as Mahatma Gandhi walked to his evening prayers, he was shot and killed by a Hindi fanatic opposed to partition, and was against Gandhi's programme of tolerance for all religions and creeds. Gandhi was admired and honored by Indians as the father of their nation, and by the world because he lived by his beliefs no matter what. He inspired the Indian people to attain independence for their country by a technique of nonviolent movement against British rule. In conclusion, Mahatma Gandhi was indeed a great man. "Generations to come will scarcely believe that such a one as this walked the earth in flesh and blood. ...read more.