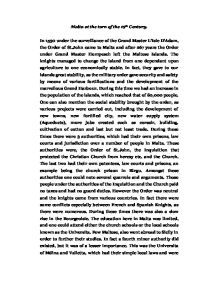 Malta at the turn of the 19th Century.

Malta at the turn of the 19th Century. In 1530 under the surveillance of the Grand Master L'Isle D'Adam, the Order of St.John came to Malta and after 267 years the Order under Grand Master Hompesch left the Maltese Islands. The knights managed to change the island from one dependant upon agriculture to one economically stable. In fact, they gave to our islands great stability, as the military order gave security and safety by means of various fortifications and the development of the marvellous Grand Harbour. During this time we had an increase in the population of the islands, which reached that of 80,000 people. One can also mention the social stability brought by the order, as various projects were carried out, including the development of new towns, new fortified city, new water supply system (Aqueducts), more jobs created such as corsair, building, cultivation of cotton and last but not least trade. During these times there were 3 authorities, which had their own prisons, law courts and jurisdiction over a number of people in Malta. These authorities were, the Order of St.John, the Inquisition that protected the Christian Church from heresy etc. and the Church. The last two had their own patentees, law courts and prisons, an example being the church prison in Birgu. Amongst these authorities one could note several quarrels and arguments. Those people under the authorities of the Inquisition and the Church paid no taxes and had no guard duties. However the Order was neutral and the knights came from various countries. In fact there were some conflicts especially between French and Spanish Knights, as there were numerous. During these times there was also a slow rise in the Bourgeoisie. The education here in Malta was limited, and one could attend either the church schools or the local schools known as the Universita. Few Maltese, also went abroad to Sicily in order to further their studies. ...read more.

Maitland had more than one job and Malta was just one of the many. Special and particular needs of the Maltese were neglected to be sacrificed for the needs of Britain as the motherland of the Mediterranean. In 1824 Sir Thomas Maitland died. The Maltese knew him as King "Tom", as he was autocratic and very despotic in his manners. He was arrogant in his attitude as he dismissed the lawyers and doctors. This can be noticed in the changes he made, were he took more care to the English demands than to those made by the Maltese. Constitutional Aspirations Under Governor Ponsonby who replaced Maitland in the span of 1827-1836, Malta experienced some prosperity, due to the ships that entered the ports before going to the Greek war of Independence, even if it was on a short time basis. Opposition on the island was being organised, evidence being Camillo Sciberras who set-up the Comitato Generale. It consisted of high-class people and the bourgeoisie. The comitato didn't like what Maitland had done for Malta, as these people were not treated well by the administration. Maybe the reason for their treatment was because they weren't pro-English, and this cancelled their demand of having a say in the government. On 1st April 1835 a Constitution was issued, and these consisted of a council of members, 4 of them already held an office (ex-officio) while the governor chose the other three. The ex-officio members were the senior military officer (British), the chief secretary of the state (British), the Bishop (Maltese) and the Chief Justice (Maltese). The other three members were all merchants, where two of them were Maltese and the other was British. Notice that these people were not elected but chosen by the government, and hence indirectly they weren't representing the citizens. They were there to advise and to assist and not to make laws. They could hold discussions and voting but the governor wasn't forced to accept their proposals. ...read more.

The followers of this party were sometimes considered to be biased and fickle, especially when new legal institutions were imposed on the Maltese. The leader of the Riformisti was Sigismondo Savona who had attended to the Royal Military Asylum in Chelsea. He also had experienced the British army and served as a regiment's schoolmaster. He considered himself to be a liberal patriot and the preacher of social continuous change. His ideas were expressed in the newspaper called Public Opinion. The landed aristocracy, i.e. the nobles, the business people (because of the trade in port) and the workers (port workers, fortification etc) saw the British as their employees thus preferred to support the Riformisti. Even though it can be seen as an anti-national position, the citizens did what favoured them, thus saw the English as a reliable employment promise and preferred them form the local educated people that in return didn't proof what they preached. Besides the Anti-Riformisti made use of the Italian and totally ignored the Maltese language that was considered to be useless for educational purposes. The challenge to combine the Maltese by means of making them pro-British and hence decreasing Italian influence was complicated and had several suppositions. In 1883 we had a change in franchise, the main being the money rent on property per year. This meant that the authorization depended upon the money and not upon the level of education and academic knowledge a person had. This lead to a problem where the people in the council were not educated and the Anti-Riformisti who were the educated and didn't possess a lot of money found themselves in a critical position. As revenge Mizzi's party had urged imbeciles people to be elected and this lead to revise this franchise in the Knutsford Constitution and the parties participated in the elections that followed. In 1891 we had the unity of Savona and the followers of Mizzi under the Partito Unionista that became the government of that time. This party separated in 1893 and the Partito Nazionale under Fortunato Mizzi and the Partito Popolare under Savona were formed. +++++++++++++++++++++++++++++++++++++++++++++++++ ...read more.