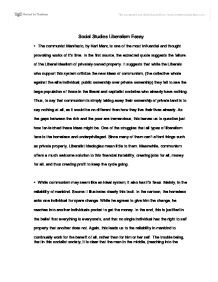 Mankind's Inability to Self Govern

Social Studies Liberalism Essay � The communist Manifesto, by Karl Marx, is one of the most influential and thought provoking works of it's time. In the first source, the extracted quote suggests the failure of the Liberal idealism of privately owned property. It suggests that while the Liberals who support this system criticize the new ideas of communism, (the collective whole against the elite individual; public ownership over private ownership) they fail to see the large population of those in the liberal and capitalist societies who already have nothing. Thus, to say that communism is simply taking away their ownership of private land is to say nothing at all, as it would be no different then how they live their lives already. ...read more.

In the end, this is justified in the belief that everything is everyone's, and that no single individual has the right to self property that another does not. Again, this leads us to the reliability in mankind to continually work for the benefit of all, rather then for him or her self. The trouble being, that in this socialist society, it is clear that the man in the middle, (reaching into the other's pocket) does not, and clearly should not, care about another persons belongings and value. This leads to the other individual questioning the fairness of this all, wondering why it's he that has to pay for the poor, and not the man who agreed to help support the poor. ...read more.

This inequality then becomes a burden for the government, eventually rising to an extreme level of unemployed and impoverished citizens. While the source competes that each individual has a way to support themselves, (competition) it fails to address the flaws, and thus the poor find ways outside of the regular system (the laws of justice) to make a living in the system. In the end, the sources connect in one fundamental way. Flaws. Each system in their own has a flaw, one that will stop it from being a completely ideal system for each and every class. In liberalism, there will always be the poor to beg from the rich. In socialism and communism, the public will fail to see the incentive to work for the collective. The common people, if given the freedom, will always be separated by classes and status. ...read more.