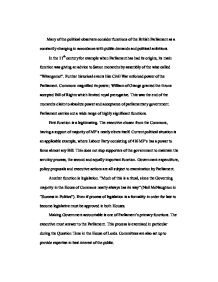 Many of the political observers consider functions of the British Parliament as a constantly changing in accordance with public demands and political ambitions. Discuss

Many of the political observers consider functions of the British Parliament as a constantly changing in accordance with public demands and political ambitions. In the 11th century for example when Parliament has had its origins, its main function was giving an advice to Saxon monarchs by assembly of the wise called "Witangemot". Further historical events like Civil War enforced power of the Parliament. Commons magnified its power; William of Orange granted the throne accepted Bill of Rights which limited royal prerogative. This was the end of the monarchs claim to absolute power and acceptance of parliamentary government. Parliament carries out a wide range of highly significant functions. First function is a legitimating. The executive chosen from the Commons, having a support of majority of MP's nearly elects itself. Current political situation is an applicable example, where Labour Party consisting of 416 MP's has a power to force almost any Bill. This does not stop supporters of the government to maintain the scrutiny process, the second and equally important function. ...read more.

In the Upper House whips can only use the power of persuasion on its members, while the whips from the House of Commons may use threat to keep MPs in line, as they are unlike Lords, democratically elected and more accountable to the public. There are various reasons for tension between House of Commons and House of Lords. First of them might be fact that the majority of MPs would consider themselves to be the voice of the people, because they have been elected democratically. They see the House of Lords as being out of touch with the electors wishes, and therefore basing they decisions on they personal opinions and what they think the electorate needs, as for the House of Lords they see the MPs as reactionary. Therefore they often take the view that the MPs have knee-jerk-reaction and they feel that have countered that, almost adopting a big brother position which often leaves MPs feeling patronised. ...read more.

Providing independent expertise is possible through creating select committees. European legislation and the work of EU are well inspected by the Upper House. At this stage effective political organization is necessary to ensure that political changes will only improve economical situation of the countries. Performing a wise control over public finances will help to provide the best public health services, educational system, public safety, etc. This all shows how important is that, a person that rules the country is wisely selected in process of democratic elections and represents the best interest of the public. An effective political organization should be up to date with current political affairs from all round the world and what is more important; should answer to current needs of the public and be able to protect the country in any circumstances. Strong leadership is one of the most significant attributes of effective political organization. Lack of it could be observed during government under John Major. After 1992 elections he was in parliamentary minority. Division over Europe attracted press criticism which eventually damaged his government. This leaves one conclusion; lack of decisive style of leadership leads to failure (class video 2004). ...read more.