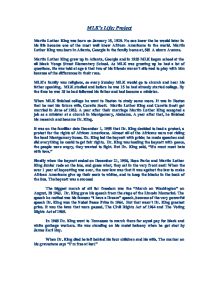 MLK's Life: Project Martin Luther King was born on January 15, 1929. No one knew the he would later in his life become one of the most well know African Americans in the world. Martin Luther King was born in Atlanta, Georgia in the family home at, 501 Auburn Avenue. Martin Luther King grew up in Atlanta, Georgia and in 1935 MLK began school at the all black Yonge Street Elementary School. As MLK was growing up he had a lot of questions. He was told at age 6 that two of his friends weren't allowed to play with him because of the differences in their race. ...read more.

A year after their marriage Martin Luther King accepted a job as a minister at a church in Montgomery, Alabama. A year after that, he finished his research and became Dr. King. It was on the familiar date December 1, 1955 that Dr. King decided to lead a protest, a protest for the rights of African Americans. Almost all of the Africans were not riding the local Montgomery buses. Dr. King led the boycott with pride; he made speeches and did everything he could to get fair rights. Dr. King was leading the boycott with peace, the people were angry, they wanted to fight. ...read more.

The biggest march of all for freedom was the "March on Washington" on August, 28 1963. Dr. King gave his speech from the steps of the Lincoln Memorial. The speech he recited was his famous "I have a Dream" speech, because of the very powerful speech Dr. King won the Nobel Peace Prize in 1964. But that wasn't Dr. King greatest prize. It was the laws that were passed, The Civil Rights Act of 1964 and The Voting Rights Act of 1965. In 1968 Dr. King went to Tennessee to march there for equal pay for black and white garbage workers. He was standing on his motel balcony when he got shot by James Earl Ray. When Dr. King died he left behind his four children and his wife. The marker on his gravestone says "I'm free at last." ...read more.