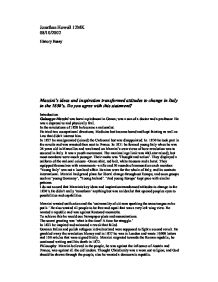 Mazzini's ideas and inspiration transformed attitudes to change in Italy in the 1830's - Do you agree with this statement?

Jonathan Howell 12MK 08/10/2002 History Essay Mazzini's ideas and inspiration transformed attitudes to change in Italy in the 1830's. Do you agree with this statement? Introduction Guisseppe Mazzini was born in piedmont in Genoa; was a son of a doctor and a professor. He was a depressive and physically frail. In the revolutions of 1820 he became a nationalist. He tried two occupational directions, Medicine but became bored and kept fainting as well as Law that didn't interest him. In 1827 he amalgamated (joined) the Carbonari but was disappointed. In 1830 he took part in the revolts and was arrested then sent to France. In 1831 he formed young Italy when he was 26 years old in Marseilles and was based on Mazzini's own views of how revolution was to succeed in Italy. It was a youth movement. The maximal age limit was 40(Later raised), but most members were much younger. Their motto was 'Thought and action'. They displayed a uniform of the national colours -Green shirt, red belt, white trousers and a beret. They equipped themselves with armaments -a rifle and 50 rounds of ammunition each member. 'Young Italy' was not a localised affair. Its aims were for the whole of Italy, and its contacts international. Mazzini had grand plans for liberal change throughout Europe, and soon groups such as 'young Germany', 'Young Ireland'. 'And young Europe' kept pace with similar patterns. ...read more.

In March 1821 the liberals (moderate and non-violent reformers) appealed to him to lead the revolution, and it seems that he agreed to do so, although he later denied it when it failed. There are also suggestions, though there is no clear evidence for it, that he may have been acting as a government agent and only pretending to be in sympathy with revolutionaries in order to gather information about their plans. Such actions would be in keeping with their clandestine personality. Perhaps, and probably the most likely, he had not made up his mind and just dithered as he hesitated between two or more possible causes of action. 'The legend of Charles Albert' as someone who could not make up their mind has begun. While he was dithering (he was nicknamed the wobbler for this) a revolutionary group seized the fortress of Alessandria in Genoa and established a provisional (Temporary) government calling itself the 'kingdom of Italy' and, rather foolishly declaring war on Austria. This declaration came to nothing because Victor Emmanuel, tired of being strained by revolutionary groups to grant political and social reforms, and worried by reports of new army mutinies in Turin, decided to abdicate. He left for niece, close to the western frontier of piedmont, as revolution spread throughout his kingdom. His brother and heir, Charles Felix, succeeded him, but died in 1831.This left his son Charles Albert to become, at last king of Piedmont. It looked as though his reign was to be as absolute (powerful) ...read more.

Where revolutions were successful in ousting their rulers, the success was only temporary and due more to the failure of Governments to take effective united action. Local affairs, concerned only with limited areas, weakened the revolutions. There was little communication between the revolutionaries in the different states and even less co-operation. The revolutionaries in the different states had even less co-operation ; the revolutionary government in Bologna refused to send help to Modena and elsewhere revolutions were not co-ordinated. They relied heavily on a network of small assemblages of revolutionaries set up by the carbonari and other secret societies, but these were isolated units so their aims differed from place to place. Most revolutionaries were surprisingly moderate in their demands and not accustomed to violence. Usually all they were trying to achieve was the granting of a constitution to allow the people some part in government. The revolutionary governments were mainly middle class, except in Sicily where peasants were involved. Elsewhere revolutionary leaders didn't encourage popular interest and support. Not surprisingly, ordinary people often welcomed back their past rulers with open arms because middle class revolutionaries didn't want mass involvement in revolution. They feared allowing the mob to intervene that was less well educated and would animate a democracy that would unsettle society and its class divisions would reinstate monarchies as well as Republics. In conclusion: I do not accord with the statement that he transformed attitudes but he did adapt many ways of thinking and aided reform. I believe Mazzini to be a famous important publisher and revolutionary that made many changes, that improved society. ...read more.