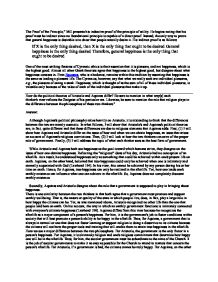 Mill presents his inductive proof of the principle of utility

Then, (2) I will look at how the two thinkers conceive of the proper role of government. Finally, (3) I will address the topic of what each thinker sees as the best form of government. While Aristotle and Aquinas both see happiness as the goal toward which humans strive, they disagree on the issue of how one obtains happiness. Reflecting the "religious" ideas of his day, Aristotle had no conception of an afterlife. As a result, he understood happiness only as something that could be achieved within one's present life on earth. Aquinas, on the other hand, believed that true happiness could only be achieved when one is intimately and eternally acquainted with God (Lawhead 194). In his view, this cannot be achieved by any person during his or her time on earth. Hence, for Aquinas, true happiness can only be realized in the afterlife. Yet, how one leads one's earthly existence can influence what one can achieve in the afterlife. ...read more.

Thus, for Aquinas, a government that is always in turmoil or one that does not foster learning or support religion is doing a disservice to its citizens because the citizens will not have the proper tools and training that will enable them to attain true happiness in the afterlife. Here we see a major difference between the two philosophers. For Aristotle, the government is the only factor in a person's happiness. For Aquinas, it is ultimately religion and one's religious commitment that determine how happy one will be in the afterlife. Thus, for him, the secular government must be subordinate to the aims of the Church. It is the job of secular governments to make it as easy as possible for the Church to attend to matters that concern the person's afterlife. For Aristotle, if a government is bad, the citizens cannot be truly happy. For Aquinas, on the other hand, a person can be truly happy - in the afterlife - even if his or her government is bad; however, it is much easier for the person to attend to religious matters when the government is good. ...read more.