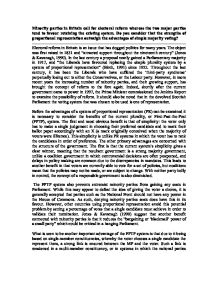 Minority parties in Britain call for electoral reform whereas the two major parties tend to favour retaining the existing system. Do you consider that the strengths of proportional representation outweigh the advantages of simple majority voting?

Minority parties in Britain call for electoral reform whereas the two major parties tend to favour retaining the existing system. Do you consider that the strengths of proportional representation outweigh the advantages of simple majority voting? Electoral reform in Britain is an issue that has dogged politics for many years. The object was first raised in 1831 and "attracted support throughout the nineteenth century" (Jones & Kavanagh, 1990). In the last century a proposal nearly gained a Parliamentary majority in 1917, and "the Liberals have favoured replacing the simple plurality system by a system of proportional representation" (Birch, 1991) since 1922. Throughout the last century, it has been the Liberals who have suffered the 'third-party syndrome' perpetually losing out to either the Conservatives, or the Labour party. However, in more recent years the increasing number of minority parties, and their growing support, has brought the concept of reform to the fore again. Indeed, shortly after the current government came to power in 1997, the Prime Minister commissioned the Jenkins Report to examine the possibility of reform. It should also be noted that in the devolved Scottish Parliament the voting system that was chosen to be used is one of representation. ...read more.

Firstly, it is possible to determine the results of a FPTP election in a matter of hours, compared to some PR elections in which the result may not be known for days or weeks. Secondly, the cost to run a simpler FPTP election is considerably less than running an election based on a complex, more involved PR system. This is not to suggest that the FPTP system is without its faults, indeed it is regarded as being grossly unfair as the votes for the party which does not win are, in effect, wasted. When it is considered that there are millions of 'wasted' votes, this is surely one of the reasons that voter apathy is so rife in Britain with a party wholly in control, the concept of a responsible government is also diminished. voter turnout of 76% at the 1997 election, compared with turnouts over 80% in countries utilising PR systems. The outcome of FPTP elections in Britain are also seen to result in a socially unrepresentational government: for example, if it is assumed that approximately half of the voting population are women, it follows that half of the MPs should be female - this has obviously never been the case. ...read more.

An electoral system based on PR can be seen to be fairer to the electorate as it considers all of the opinions, and it would "allow for free and fair competition between all political parties" (Amy). The current system is clearly biased against the minority parties, and it serves to protect the two major parties from any competition. Certainly, a cynic would see this as the reason for a PR system never having been adopted by a reigning government. Although, fairness appears to be the only principal reason for adopting a PR system, compared to the lengthier list of advantages for a FPTP system, if the FPTP advantages are considered, they cannot be viewed as comparable in terms of importance. As there are several systems based on PR, it must be possible to adopt an existing system, or to develop a system that would both suit Britain, while avoiding many of the objections raised by campaigners for FPTP. Patronising voters by expecting them only to be able to indicate their choice with a cross, and so readily dismissing such a large proportion of the total votes cast can only serve to infuriate the electorate and to indicate that reform of the electoral system in Britain must be considered. ...read more.