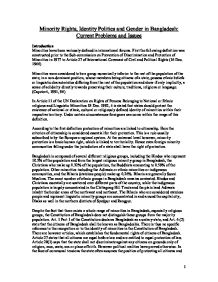 Minority Rights, Identity Politics and Gender in Bangladesh: Current Problems and Issues Introduction Minorities have been variously defined in international forums. First the following definition was constructed prior to the Sub-commission on Prevention of Discrimination and Protection of Minorities in 1977 to Article 27 of International Covenant of Civil and Political Rights (16 Dec. 1966) Minorities were considered to be a group numerically inferior to the rest of the population of the state, in a non-dominant position, whose members being citizens of a state, possess ethnic beliefs or linguistic characteristics differing from the rest of the population and show if only implicitly, a sense of solidarity directly towards preserving their culture, traditions, religions or language. (Capotorti, 1991, 96) In Article 11 of the UN Declaration on Rights of Persons Belonging to National or Ethnic religious and Linguistic Minorities 18 Dec. 1992, it is stated that states should protect the existence of national or ethnic, cultural or religiously defined identity of minorities within their respective territory. Under certain circumstances foreigners can come within the range of this definition. According to the first definition protection of minorities are linked to citizenship. Here the criterion of citizenship is considered essential for their protection. This is a rule usually subscribed to by the European regional system. At the universal level however, minority protection is a basic human right, which is linked to territoriality. Hence even foreign minority communities falling under the jurisdiction of a state shall have the right of protection. Bangladesh is composed of several different religious groups, including the Hindus who represent 10.5% of the population and form the largest religious minority group in Bangladesh, the Christians who make up 0.32% of the population, the Buddhists amounting to 0.59% of the population. Other minorities including the Adivasis or ethnic minorities or indigenous communities, and the Biharis (stateless people) make up 0.26%. Biharis are generally Sunni Muslims. ...read more.

But after the partition middle-class Hindus have been gradually migrating to bordering West Bengal. But nevertheless, there is still a large community of Hindus especially those of the lower caste-professions for example, the Rishis (those who process leather), the Bawalis/Moualis (the wood-collectors and honey hunters who live off the forest), the Kolus (those grow mustard seeds and manufacture oil) and settler communities from the North of India like the Harijans, Kaoras or the sweeper communities brought in by the British. Besides these communities many of the villages in this region are inhabited by 70 to 80 % Hindus who cultivate their own land. This was also the area where most of the post-election violence against the minority communities took place. In a newspaper report (Daily Janakantha, 20 November, 2003), the Hindu Bouddho Christian Oikkyo Parishad gave the following figures from this violence on October 2001. About 23 people were killed out of which 20 were women and children! About 32 women and children were reported raped. Besides this innumerable instances of abduction, threat, and the destruction of deities were reported. The incident was deemed to be the result of machinations of a vested group of people who saw it to their advantage both politically and economically to foreground sectarianism as political vendetta against the Awami League. The participation of religious minorities in mainstream politics in Bangladesh has been largely marginalized with the establishment of a pro-Islamic ideology. Even so because of the specific historical connection of the Awami League with the secularist notion they have been identified as a substantive vote bank of Awami League. However, the existence of many structural discriminatory practices as well as the Vested Property Act, which for over three decades until it was repealed by the previous Awami League government, had been responsible for a systematic and pervasive eviction of Hindus from their homesteads and a resultant exodus into India. ...read more.

Conclusion From the above it becomes quite clear minorities in Bangladesh need to be protected from the following threats to their security: (a) physical insecurity, especially security of minority women, (b) land grabbing tendencies of the power structure, (c) discrimination in jobs and professions, (d) unbridled extortion, inability to seek or access justice, (e) attack by law enforcing agencies, (f) inability to sustain ones livelihood, (g) inability to sustain ones culture and religious practices. From the point of the view of state policy and national politics, the main failings in perpetrating communal harmony are the following: (a) No constitutional safeguards for the protection of minorities; (b) majoritarian state ideology, which does not recognize pluralism or diversity; (c) mis governance in general, especially in terms of economic governance; (d) deliberately using communalism as an instrument for the appropriation of wealth; (e) institutionalization of the vote-bank concept; (f) subservience to the two-nation theory in political practice; (g) allowing bipolarity in politics aggravate questions of identity: Bengali first or Muslim first. This last tension has been aggravated by the growing influence of the extreme right both within the BNP leadership as well as from the Islamist parties. So far the only temperance on state policies has come from external pressure of donors and major powers, both global and regional. There have been times when civil society voices have been subdued, by threat of repercussion on their fundamental freedoms. But it is also true that such voices against obscurantist and communal politics will be strengthened if they can join hands across borders and around the world denouncing the tenets of imperialism and fascism which seem to rein both global and regional politics today. A reinvented and invigorated notion of a secular political culture is the need of the hour. While much work needs to be done within Bangladesh itself, much of the past burdens of the two nation-theories and the consequent resolution of identity politics need to be worked out at both the regional and global level. ...read more.