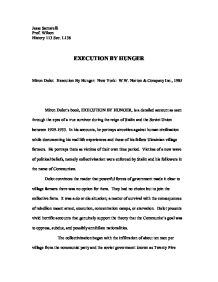 Miron Dolot's book, EXECUTION BY HUNGER, is a detailed account as seen through the eyes of a true survivor during the reign of Stalin

Jesse Santarelli Prof. Wilson History 113 Sec. L138 EXECUTION BY HUNGER Miron Dolot. Execution By Hunger: New York: W.W. Norton & Company Inc., 1985 Miron Dolot's book, EXECUTION BY HUNGER, is a detailed account as seen through the eyes of a true survivor during the reign of Stalin and the Soviet Union between 1929-1933. In his accounts, he portrays atrocities against human civilization while documenting his real life experiences and those of his fellow Ukrainian village farmers. He portrays them as victims of their own time period. Victims of a new wave of political beliefs, namely collectivization were enforced by Stalin and his followers in the name of Communism. ...read more.

This was the pattern throughout the entire region in all of the villages. It set neighbor against neighbor, brother against brother all in the name of survival. Once someone you knew joined the collective farm, he was no longer your friend. The infiltration expanded into the exploitation of the farmers. They were held captives of their own free will on their own lands. Overwhelmed by the Party, resistance was fruitless since they were persuaded by sleep deprivation, humiliation, and degradation. The people became broken spirits in appearance. It was a silent war between the communists and the collective farmers. Dolot exhibits a hidden pride in the farmers by writing of their subtle resistances, sabotages, and stubborn survival. ...read more.

Excerpts from this book should be used and studied in high schools and colleges because of the examples of atrocities committed in that time period are supporting evidence that collectivization was a failure. Additionally, no society is perfect. Every corner of the world has its sins that we have gradually learned about. Today's society has learned about black slavery, women's oppression, the Jewish and Polish holocaust, and even the near extermination of the Native Americans just to name a few. Little is known or publicized about the starvation of the Ukrainian people but Dolot's book can open the door to understanding this tragedy and suffering that affected millions of the Ukrainian people. ...read more.