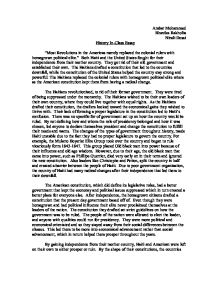 Ambar Mohammed Bhavika Rakholia Nirali Desai History In-Class Essay "Most Revolutions in the Americas merely replaced the colonial rulers with homegrown political elite." Both Haiti and the United States fought for their independence from their mother country. They got rid of their old government and established their own. The Haitians drafted a constitution that led to the countries downfall, while the constitution of the United States helped the country stay strong and powerful. The Haitians replaced the colonial rulers with homegrown political elite where as the American constitution kept them from having a radical change. The Haitians revolutionized, to rid of their former government. They were tired of being suppressed under the monarchy. The Haitians wished to be their own leaders of their own country, where they could live together with equal rights. ...read more.

The changes of the types of government throughout history, made Haiti unstable due to the fact they had no proper legislature to govern the country. For example, the Mulatto Boyerist Elite Group took over the country and began to rule vicariously form 1843-1847. This group placed Old black men into power because of their influence and old age wisdom. However, due to their age, the old black men that came into power, such as Phillipe Guerrier, died very early on in their term and ignored the new constitution. Also leaders like Christophe and Petion, split the country in half and created a barrier between the people of Haiti. Due to poor government organization, the country of Haiti had many radical changes after their independence that led them to their downfall. ...read more.

The people of the nation were allowed to elect the leader, and anyone with qualities could run for presidency. They were more political and economical orientated and so they stayed away from their social differences between the classes. This led them to be more into economical advancement rather than social advancement, which in return helped them prosper throughout the years. By gaining independence from their mother country, Haiti and American were left on their own to either prosper or ruin. By the shape of their constitutions, the countries were building their steps to a better organized country. However, the misleading constitution of Haiti ruined its country and led them to form political elites, while American prospered and began to grow with the vote of the people. Even till this day, Haiti is still a country that is in need of aid from other countries while America is prospering into one of the world's greatest country. ...read more.