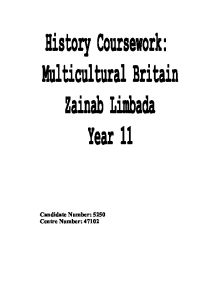 Candidate Number: 5250 Centre Number: 47102 This coursework is about how Britain came to be a multicultural, multilingual society. From an Anglo-Saxon community, Britain has become a land where, everyday, we meet people of different faiths, races, cultures and languages. We walk into churches and see black Africans worshipping, we see mosques, temples and synagogues aplenty, where in the early 1800s these common sights would not have been considered. So, how did this vast change overcome Britain? Migration... Q1) With reference to the period 1880 to the present day, explain why people chose to migrate to Britain. Populations' resettlements are not new. People are driven to relocate between countries and regions for many reasons including work, study, harsh local conditions, persecution, discrimination, and even because of a pure sense of adventure. Many migrants move from poor countries to richer ones, this creates a balance or net-migration1. Immigration has been proceeding for years, but one of the issues that hindered it in the past was transport from one place to another with so much to re-locate. With modern technology, however, this problem has been solved and governments who attempt to secure their citizens physically, economically and politically, now create the hindrances. When investigating the reasons why people choose, and chose, to migrate, one must consider the push and pull factors. ...read more.

Since immigration to Britain begun in droves, in the 1880s, Britain's rate of tolerance has been queried. Let us look at how the government and public responded to the first group of mass immigrants: the Jews. The government responded to public concern about the numbers of Jewish people allowed into Britain after 1906. Initially, most British sympathised with the problems of the Eastern Jews. However, from 1984 onwards, as the numbers of Russian Jews increased, attitudes changed. The public felt that the immigrants, or 'aliens' as they were known as, were threatening their jobs and housing so, they became more hostile. The 'aliens' soon became an issue in British politics. Many people felt that a law was needed to decide who would settle in Britain. The society felt that the Jews added to overcrowding and hygiene problems and to competition for work. In 1892, 1894 & 1895 the Trade Union Congress passed resolutions against 'alien immigration'. Interest in a law to limit immigration came from within two main parties in the 1890s, namely, the Conservative and Liberal parties. In 1900 when the Conservatives won the election, they demanded immigration controls. A group campaigning for restrictions on immigration emerged, called the British Brothers' League. It was backed and created by some Conservative MPs. A Royal Commission on Alien Immigration was set up by the conservative government in March 1902. ...read more.

The refugees brought sympathy in some but anger and hatred in others. The government ensued a policy of supplying the asylum seekers with benefits to stop them from jeopardising the jobs of the British Citizens. Beginning in the 1970s racism in the police force began against the blacks. Black people were harassed by the police and made to stop without any reasons. Trade unions were also prejudiced against foreign labour; skilled immigrants were given low-paid unskilled jobs. Only after the Stephen Lawrence incident in 1933 did matters in these institutions change. Only in the last 10-15 years has British tolerance increased toward immigrants. Propaganda has decreased racism in institutional facilities such as the police. The majority of British citizens live in peaceful harmony however; there are the trouble-making minority. Due to rising world tension there have been racist riots and attacks like the Oldham riots in the year 2000 to 2001 owing to the National Front Party and more recently national mistrust of Muslims. Therefore, conclusively I cannot say that Britain has been a tolerant country. Britain has been tolerant up to a point but the real debate, publicly and openly with all parts of society coming forward to express their views, has only just begun. The debates about integration, national identities etc. are pushing the borders of Britain's tolerance policy and we are yet to see how far Britain will stretch it. 1 Net-migration means the inflows of people into a region or a country minus the outflows in a given time period. ?? ?? ?? ?? ...read more.