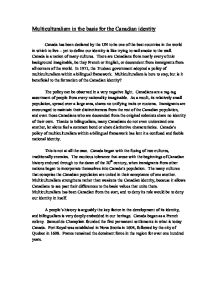 Multiculturalism in the basis for the Canadian identity.

Multiculturalism in the basis for the Canadian identity Canada has been declared by the UN to be one of the best countries in the world in which to live - yet to define our identity is like trying to nail smoke to the wall. Canada is a nation of many cultures. There are Canadians from nearly every ethnic background imaginable, be they French or English, or descendent from immigrants from all corners of the world. In 1971, the Trudeau government adopted a policy of multiculturalism within a bilingual framework. Multiculturalism is here to stay, but is it beneficial to the formation of the Canadian identity? The policy can be observed in a very negative light. Canadians are a rag-tag assortment of people from every nationality imaginable. As a result, its relatively small population, spread over a large area, shares no unifying traits or customs. Immigrants are encouraged to maintain their distinctiveness from the rest of the Canadian population, and even those Canadians who are descended from the original colonists share no identity of their own. Thanks to bilingualism, many Canadians do not even understand one another, let alone feel a common bond or share distinctive characteristics. Canada's policy of multiculturalism within a bilingual framework has lent it a confused and feeble national identity. This is not at all the case. Canada began with the fusing of two cultures, traditionally enemies. The cautious tolerance that arose with the beginnings of Canadian history endured through to the dawn of the 20th century, when immigrants from other nations began to incorporate themselves into Canada's population. ...read more.

Under this Act, the Canadiens were permitted to keep their way of life virtually intact, and to participate in their own government. Such freedom was essential if the British hoped to keep Quebec's loyalty in the face of the discord that was brewing in the Thirteen Colonies to the south of British North America. The Quebec Act kept the Canadiens loyal during the American Revolution, but caused dissent among the British Loyalists who fled to British North America following the Revolution. The result was the Constitutional Act of 1791, which divided Canada into its chiefly French and English areas, referred to as Lower and Upper Canada. By forming separate governments to recognize the individuality of the French and English cultures, this prototype for bilingualism set the stage for Canada's development as a bicultural society. Interestingly, despite the traditional enmity of the French and English, the early Canadians were able to fight alongside one another to defend themselves from the American invasion during the War of 1812. The distinctively Canadian traditions of biculturalism and tolerance were already beginning to emerge in the days of our nation's infancy. A series of historical experiments determined the most effective way to govern Canada. Maintaining the biculturalism of the region was essential, as the British soon discovered. The theory of assimilating the French population simply did not work, but allowing French and English to coexist, each with a system designed to fit their needs, proved a success. This sentiment set the tone for Confederation in 1867, and endures to this day an essential trait of the Canadian identity. ...read more.

All aspects of the federal government became bilingual, as did the federal civil service, and even those aspects of life as seemingly trivial as product labeling became bilingual as well. In bilingual districts, education must be offered in both official languages. It is important to recognize the rights and needs of the francophone minority in Canada. The Official Languages Act helped to quell fears of Quebec's separation. Were such an even to occur, the significance of Canada's historical diversity and cultural tradition could be damaged beyond repair. Canada's government also sponsors a number of programs to assist recently landed immigrants to become successfully integrated into Canadian society. Programs are offered to help immigrants both financially and socially. These programs encompass everything from basic to job-specific language training, loans and financial assistance, to organizations and volunteers dedicated to helping immigrants settle into their new life. Immigrants are permitted, even encouraged to retain the culture and traditions from their country of origin. It is apparent that bilingualism and multiculturalism form an integral part of the Canadian identity. It has influenced us throughout the history of our nation, and led the Canadian people to becoming a tolerant, freedom-loving society that respects the equality and identity of the cultures that comprise it. It is true that many Canadians share little in common: they may come from opposites ends of the world to live at opposite ends of a continent. For this reason, multiculturalism does not weaken our identity, multiculturalism is our identity. Colonization initiated it, history has proven it, and government policy has reaffirmed it. The policy of multiculturalism within a bilingual framework can only lend more strength to this distinctively Canadian form of identity. ...read more.