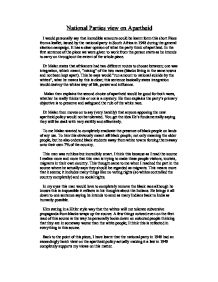 National Parties view on Apartheid I would personally say that incredible amounts could be learnt form this short Piece from a leaflet, issued by the national party in South Africa in 1948 during the general election campaign. It has a clear opinion of what the party think of apartheid. In the first sentence of the piece we were given to work from the person starts as he intends to carry on throughout the extent of the whole piece. Dr Malan states that afrikaners had two different routes to choose between; one was integration, which meant, "mixing" of the two races (blacks living in the same towns and not been kept apart). ...read more.

Dr Malan then moves on to say (very harshly) that anyone apposing the new apartheid policy would not be tolerated. You get the idea He's fundamentally saying they will be dealt with very swiftly and effectively. To me Malan wanted to completely eradicate the presence of black people on lands of any use. To him this obviously meant all black people; not only meaning the older people, but he also ordered black students away from white towns forcing them away onto their own 7% of the country. This man was ruthless but incredibly smart. I think this because as I read the source I realise more and more that this man is trying to make these people visitors, tourists, migrants in their own country. ...read more.

He brings it all down to one sentence saying he intends to send as many Indians back to India as humanly possible. Him stating in a Hitler style way that the whites will not tolerate subversive propaganda from blacks wraps up the source. A few things noticed even on the first read of this source is the way he personally looks down on coloured people thinking that they are in someway worse than the white people; I think this is reflected in everything in this source. Back to the point of this piece, I have learnt that the national party in 1948 had an exceedingly harsh view on the apartheid policy actually making it a law in 1948 completely supports my views on this matter. ...read more.