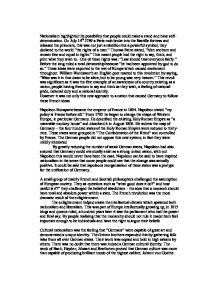 Nationalism in relation to France and Germany.

Nationalism highlighted the possibility that people could make a stand and have self-determination. On July 14th 1789 a Paris mob broke into the Bastille fortress and released the prisoners, this was not just a rebellion but a powerful symbol, they declared to the world "the rights of a man." Thomas Paine stated, "Men are born and remain free and equal in rights." This meant people had the right to say, think, and print what they wish to. One of these rights was: "Law should treat everyone fairly." Before the king ruled a total dictatorship because "he had been appointed by god to do so." These ideas were exported to the rest of Europe which caused excitement throughout. William Wordsworth an English poet reacted to this revolution by saying, "Bliss was it in that dawn to be alive, but to be young was very heaven." This revolt was significant as it was the first example of an awareness of a country existing as a nation, people having freedom to say and think as they wish, a feeling of national pride, national duty and a national identity. However it was not only this new approach to a nation that caused Germany to follow these French ideas. Napoleon Bonaparte became the emperor of France in 1804. ...read more.

Voltaire a philosopher in the 18th centaury argued that the monarch should act in the interest of the people, Monte Quell extended this idea by arguing the case for a constitutional monarchy - that limits should be set upon a monarch's power. However probably the most significant idea was by Jean-Jacques Rousseau who argued that there was a "social contact" between the government and the people, and the people were morally correct to overthrow it if the government breached this contract. The people were the sovereign force not the monarchy. This encouraged liberalism, the desire to create a "free" state for the individual where rights were protected by the force of law. These feelings and ideas encouraged a new line of independence and thought by the people. Some historians argue that vital changes in the 19th century Europe were not brought by ideas but social and economic developments. The population of Europe (which in previous years had been static) increased by nearly four times in the 200 years after 1750. One historian David Thomson claimed: "No social and political order could have remained unaffected by so immense an increase of humanity" This population explosion was accompanied by the growth of industry and by the accelerating movement of people from the country to the towns to take up employment in factories and warehouses. ...read more.

Eventually troops were called to disperse them however inevitably many were killed. One account of this was "the whole street swam in blood." To keep the public happy king Frederick William 4th put himself at the head of the revolution and announced he was in favour of liberty and a united nation. In March 1948 the Frankfurt parliament was formed, however the weakness of this soon became apparent the parliament offered kind Frederick William the crown he declined saying: "Every German nobleman is a hundred times too good to accept such a diadem moulded out of the dirt and dregs of revolution, disloyalty and treason" Frederick Williams's rejection of the crown effectively ended the parliament. Nevertheless it had not been in vain, it was a step forward which could not be undone completely, Frankfurt parliament stated the issue, the solution. The only way was forward. The king proposed a "voluntary union of states under Prussian leadership." Elections were held following which a parliament met at Erfurt, however the king withdrew is support. In November 1850 Prussian and Austrian officials met at Olmutz and agreed that the bund should be re-established. Revolution in Germany had positive as well as negative aspects, it marked the entry of German people into the political life of the nation, and wider circles of the population began to take an interest in politics. The revolution had also helped to clarify political attitudes and encourages the formation of political associations. 1,727 words ...read more.