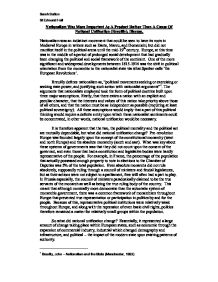 Nationalism Was More Important As A Product Rather Than A Cause Of National Unification (Breuilly). Discuss.

Nationalism Was More Important As A Product Rather Than A Cause Of National Unification (Breuilly). Discuss. Nationalism was an indistinct movement that could be seen to have its roots in Medieval Europe in writers such as Dante, Marcu, and Domenichi, but did not manifest itself in the political arena until the mid-19th century. Europe, at this time was in the middle of a period of prolonged social development that had gradually been changing the political and social framework of the continent. One of the more significant and widespread developments between 1815-1914 was the shift in political orientation from the monarchic to the nationalist state via what Sperber calls 'the European Revolutions'. Breuilly defines nationalism as, "political movements seeking or exercising or seeking state power, and justifying such action with nationalist arguments"1. The arguments that nationalists employed took the form of political doctrine built upon three major assumptions. Firstly, that there exists a nation with an explicit and peculiar character, that the interests and values of this nation take priority above those of all others, and that the nation must be as independent as possible (requiring at least political sovereignty). All these assumptions would imply that a part of this political thinking would require a definite entity upon which these nationalist sentiments could be concentrated, in other words, national unification would be necessary. It is therefore apparent that the two, the political mentality and the political act are mutually dependable, but what did national unification change? ...read more.

France's political outlook had changed drastically in the 200 years before the Great War of 1914. Through revolution, the state had replaced the King as the source of political legitimacy and the will of the nation, i.e. the people, and this was the justification of their acts. Therefore enemies of France were the enemies of the people, implying some sort of ideological national unification. However, this had not been the cause of the initial revolution, which was in effect a bourgeoisie, commercial middle class freeing itself from feudalsim, and not a rebellion of the people. However, what this produced through unification of the people under a common political cause was not only the mobilisation of mass population, but an awareness of France as a unique and remarkable state, something still prevalent in modern day political France, and referred to as 'l'exception francais'. This unification ideologically, along with the advent of the industrial state meant that the return of the monarchy in 1814 and 1815 renewed national sentiment through associating the new monarchy with the enemies of the state - enemies of the people. Hence, the Bourbon Government was overthrown 15 years later, and this act was hailed a national revolution. Post Bourbon France was therefore even more strongly nationalist than it had been before 1815, but nationalism was a product of the first revolution, absent through the persistent segregation of the population, the emphasis being on the majority middle class. ...read more.

As with France, the intervention of foreign powers only served to compound this, making them the enemies of the German people, however geographically fragmented they were at the time. Even if this did not succeed in quite the same capacity as the conservative Frankfurt National Assembly had envisioned, but the mass uprising in response to a political development is characteristic of the growth in political involvement and identification that not only marks national unification but the growth in nationalism. This prevailing sense of a united German people had been developing at least intellectually since the Lutherian Reformation, with a backlash to Papal domination in the Empire. However, 300 years later, it appeared, much strengthened, in the 19th century to be a co-ordinated and mass political statement that went on to affect foreign policy especially in the late 19th and early 20th century, and laying the foundations for the Great Wars, as it had done in France. In both France and Germany's cases national unification came at a time of intense change not only for them but for the rest of Europe, essentially embodying everything from ideology to infrastructure. It is therefore clear that nationalism as a movement was very much a product of national unification. Without a definite entity upon which to concentrate their ideals upon and to elevate as a unique and independent, there could be no focus or principle to a nationalist movement. Post-unification, its part in the formation and reinforcement of the newly consolidated state was fundamental in shaping both domestic and foreign policy in the turbulent 20th century. ...read more.