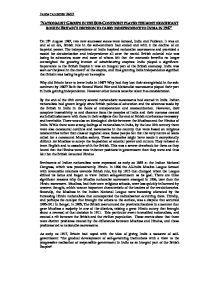 'NATIONALIST GROUPS IN THE SUB-CONTINENT PLAYED THE MOST SIGNIFICANT ROLE IN BRITAIN'S DECISION TO CARRY INDEPENDENCE TO INDIA IN 1947' On 15th August 1947, two new successor states were formed, India and Pakistan. It was an end of an era, British rule in the sub-continent had ended and with it the decline of an imperial power. The independence of India inspired nationalist movements and provided a model for decolonisation and independence all over the world. British colonial rule was losing its advocates, more and more of whom felt that the economic benefits no longer outweighed the growing burden of administering empires. India played a significant importance to the British Empire it was an integral part of the British economy. India was seen as 'the jewel in the crown' of the empire, and thus granting India independence signified that Britain was losing its grip on its empire. Why did Britain have to leave India in 1947? Why had they lost their stranglehold in the sub-continent by 1947? Both the Second World War and Nationalist movements played their part in India gaining independence. However other factors must be taken into consideration. By the end of the 19th century several nationalistic movements had started in India. Indian nationalism had grown largely since British policies of education and the advances made by the British in India in the fields of transportation and communication. ...read more.

The nationalists in India were not satisfied with this as the act did not introduce dominion status and white dominions were allowed to control their own defence and foreign policies. The act's major failing was that it ignored the religious rivalry between the Muslims and Hindus. Nearly two-thirds of India's population were Hindus and the Muslims feared that in an independent and democratic India they would be treated unfairly. In the 1937 provincial elections, the Hindus, who dominated the Congress Party under Nehru, won eight out of the eleven provinces. The Muslim League under Jinnah demanded a separate state of their own to be called Pakistan. Both Gandhi and the Congress Party were determined to preserve Indian unity. Such a rivalry between the Hindus and Muslims could only bode ill for the future of India. This rivalry played a significant role in speeding up partition, as the British became more aware that partition was unavoidable. In 1939 international events intervened with the start of World War II. India's English viceroy, Victor Alexander John Hope, declared India's entrance on the side of the Allies without consulting the Indian or Muslim political parties. This once again shows another flaw of the British regime in India, this caused the Indian National Congress to respond by quitting its power in India's government. They tried to use the war to force the issue with the British, demanding immediate independence. ...read more.

Labour politicians had developed good relations with Gandhi, and Attlee and Bevin believed the empire was as much a liability as a help in times of danger. By 1945 the real problem for the Labour government was not whether to grant independence, but how to avoid bloodshed between Congress and the Muslim League, Hindus and Muslims. The original timetable of British withdrawal by June 1948 had to be brought forward after Mountbatten's arrival (as last Viceroy) and assessment, including the decision made with Attlee that partition was required. Lord Mountbatten concluded that peace could only be achieved if partition was introduced. Mountbatten became convinced that any delay would increase violence and he pushed forward the date for Britain leaving India to August 1947. The new India and Pakistan were born in bloodshed. It was a major decision taken by the Labour government, given Britain's pride in having India for so long as 'the jewel in the crown' of the empire. In August 1947, the Indian Independence Act was signed. This separated the Muslim majority areas (in the north-west and north-east regions of India) from India to create the independent state of Pakistan. What we all knew that was inevitable was achieved. The struggle for partition had come to an end. British withdrawal from India was a commitment and policy fulfilled by the Labour government. Nationalists and the Second World War played its part in securing independence of Pakistan and India. Both had damaged Britain's credibility as a world power and both had an effect on Britain's imperial status. ?? ?? ?? ?? FAHIM TALUKDER U6SD ...read more.