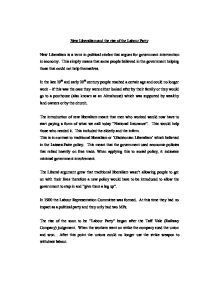 New Liberalism and the Rise of the Labour Party

New Liberalism and the rise of the Labour Party New Liberalism is a term in political circles that argues for government intervention in economy. This simply means that some people believed in the government helping those that could not help themselves. In the late 19th and early 20th century people reached a certain age and could no longer work - if this was the case they were either looked after by their family or they would go to a poorhouse (also known as an Almshouse) which was supported by wealthy land owners or by the church. The introduction of new liberalism meant that men who worked would now have to start paying a form of what we call today "National Insurance". This would help those who needed it. This included the elderly and the infirm. This is in contrast to traditional liberalism or 'Gladstonian Liberalism' which believed in the Laissez-Faire policy. This meant that the government used economic policies that relied heavily on free trade. ...read more.

Ultimately, this put the LRC above the law. In 1906 the party had elected twenty nine MPs and renamed themselves "The Labour Party". They experienced all of the usual 'teething' problems of a young party. They elected a Chairman instead of a Leader, experienced financial difficulties and found themselves unable to differentiate from the Liberals whose social reforms helped working class people. By 1914, despite being a better organisation, Labour had not made a big impact and did not seem to pose a major threat to the Liberal Party. Until Britain declared war on Germany in July 1914. The Liberal party began its' decline at the start of the war. The party began to split due to differences between the traditional and new liberalists. The war was very costly and taxes had to be raised to cope with the financial aspects. This went against traditional liberalism which believed in low taxes for the people, thereby causing "dissention in the ranks" so to speak. ...read more.

In his War Memoirs [v 1 p 602], Lloyd George compares himself to Asquith: There are certain indispensable qualities essential to the Chief Minister of the Crown in a great war. . . . Such a minister must have courage, composure, and judgment. All this Mr. Asquith possessed in a superlative degree. . . . But a war minister must also have vision, imagination and initiative--he must show untiring assiduity, must exercise constant oversight and supervision of every sphere of war activity, must possess driving force to energize this activity, must be in continuous consultation with experts, official and unofficial, as to the best means of utilising the resources of the country in conjunction with the Allies for the achievement of victory. If to this can be added a flair for conducting a great fight, then you have an ideal War Minister. It seems that even long after the war Lloyd George felt the need to smear Asquiths' leadership methods during the First World War. ...read more.