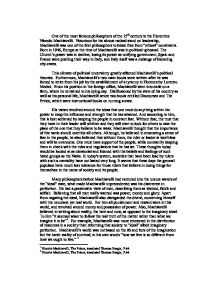 Niccolo Machiavelli. His views revolved around the ideas that one must do anything within his power to keep the influence and strength that he has attained. And according to him, this is best achieved by keeping the people in constant fear.

One of the most famous philosophers of the 15th century is the Florentine Niccolo Machiavelli. Notorious for his almost radical stand on leadership, Machiavelli was one of the first philosophers to break free from "ethical" constraints. Born in 1946, Europe at the time of Machiavelli was in political upheaval. The Church's power was in decline, losing its power as unifying government, Spain and France were pushing their way in Italy, and Italy itself was a melange of bickering city-states. This climate of political uncertainty greatly affected Machiavelli's political theories. Furthermore, Machiavelli's two main books were written after he was forced to retire from his job by the establishment of a tyranny in Florence by Lorenzo Medici. From his position in the foreign office, Machiavelli went into exile on a farm, where he remained to his dying day. Disillusioned by the state of his country as well as his personal life, Machiavelli wrote two books entitled Discourses and The Prince, which were instructional books on running a state. His views revolved around the ideas that one must do anything within his power to keep the influence and strength that he has attained. And according to him, this is best achieved by keeping the people in constant fear. Without fear, the trust that they have in their leader will whither and they will start to look for others to take the place of the one that they believe to be weak. ...read more.

Machiavelli tells us that the sovereign must take whatever action is necessary to maintain order in society. In time this will result in the most compassionate choice too. Machiavelli explains that, Cesare Borgia, by using cruelty was able to achieve order and obedience in Romangna. This contrast with the inaction of the Florentines, who allowed internal conflict to develop in Pistoia, resulting in devastation of the city. Therefore, a number of highly visible executions can be a very effective means of controlling the people and in preventing a major out break of violence and murder. Machiavelli also uses the tremendous military successes of Hannibal as an example to show us that even though Hannibal led an army of different races over foreign soil, he never had any dissension because of his reputation of extreme cruelty. Machiavelli beleived that it would be difficult to be loved and feared simultaneously. Hence, one should always prefer to be feared than to be loved. During adverse times, the fear of punishment is far more effective in maintaining control than depending upon people's goodwill and love. The Prince: - Machiavelli's book The Prince deals with the making of a society in which the people are corrupt. "Machiavelli freely prescribes for the man who wishes to acquire power and glory in a corrupt republic by becoming a tyrant rather than a public-spirited reformer."4 Addressed to Lorenzo De Medici (the new ruler of Florence), The Prince's aim is to tell a ruler how to become a good tyrant. ...read more.