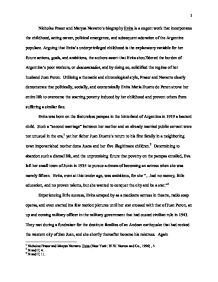 Nicholas Fraser and Marysa Navarro's biography Evita is a cogent work that incorporates the childhood, acting career, political emergence, and subsequent adoration of the Argentine populace. Arguing that Evita's underprivileged childhood is the explanatory variable for her future actions, goals, and ambitions, the authors assert that Evita shou7ldered the burden of Argentina's poor workers, or descamisados, and by doing so, solidified the regime of her husband Juan Peron. Utilizing a thematic and chronological style, Fraser and Navarro clearly demonstrate that politically, socially, and economically Evita Maria Duarte de Peron strove her entire life to overcome the scarring poverty induced by her childhood and prevent others from suffering a similar fate. Evita was born on the featureless pampas in the hinterland of Argentina in 1919 a bastard child. Such a "second marriage" between her mother and an already married public servant were not unusual in the era,1 yet her father Juan Duarte's return to his first family in a neighboring town impoverished mother dona Juana and her five illegitimate children.2 Determining to abandon such a dismal life, and the unpromising future that poverty on the pampas entailed, Eva left her small town of Junin in 1935 to pursue a dream of becoming an actress when she was merely fifteen. Evita, even at this tender age, was ambitious, for she "...had no money, little education, and no proven talents, but she wanted to conquer the city and ...read more.

Poor people don't want someone to protect them who is old and dowdy. They all have their dreams about me and I don't want to let them down."8 Evita took this personal belief even further by using her influence with Peron and his new labor party to help out the destitute. After returning from a highly publicized tour of Europe (further signifying her socio-economic transformation), Evita began to take a greater interest in the politic of her husband's regime. Actively seeking to become the "Bridge of Love" between Peron and his constituency, she established the Eva Peron Foundation, funded by the government, to aid the destitute.9 It is the role that she had the most lasting political influence, for the system of patronage that Evita established continually delivered the working class vote to Peron. By virtually forcing unions to donate "gifts" to her foundation, Evita gained a considerable amount of capital for her social programs - an estimated 200 million (USD) in 1973. In fact, "giving was so widespread that it had to be viewed as an alternative form of taxation."10 Some of this money was given as "direct aid" to those that wrote her and came to her office,11 some for basic necessities like shoes and pots,12 and some was used for ambitious projects like nursing homes and primary schools in Buenos Aires's poorest barrios.13 However, all were used to further the political career of Peron, even though Evita was genuinely concerned about the welfare of the masses. ...read more.

Additionally, the authors sustain their argument from the introduction to the epilogue. Although each chapter deals with a specific theme or era in the life of Evita, all address the woman's desire to change her social status. Not only do the authors construct a cogent argument about the life of Evita, but also give the reader a holistic picture of post-World War Two Argentina. Through the protagonist, her husband, descriptions of the international political setting, Argentina's ISI economic model, and the class and political alliances developed during Peronism, all facets of Argentine society are addressed. The life of Evita is admirably not portrayed in an economic, political, or sociological vacuum. Another laudable feature of the biography is the style. The diction is easily understood and is not packed with convoluted academic jargon that leads to confusion (most likely due to Fraser's journalistic background). The authors are direct, clear, and animated. For example, the aforementioned quote concerning Evita's "Cinderella" portrayal paints a vivid portrait in the reader's mind of the woman's determination to transform herself. Additionally, the assigning of individual chapters specific categories (such as "wife of the President" or "the gift of giving") creates a work that allows the reader to focus on one issue at a time and thus understand the isolated chronology of her childhood, struggles in Buenos Aires, and political contributions that does not sacrifice the reader's perception of historical time. ...read more.